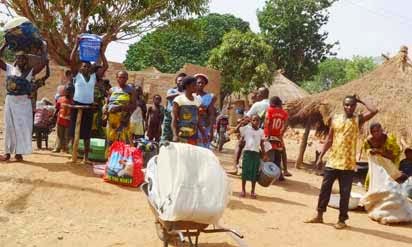 The residents of Egba village in Agatu LGA of Benue have given graphic details of how some suspected Fulani terrorists attacked their community in the wee hours of Sunday killing several including babies.

Sule Audu, a senator representing Agatu/Apa LGA in the State House of Assembly told journalists in Makurdi on Tuesday that the Fulani attackers initially resorted to hacking their victims down with machetes.

He said the herdsmen killed several people in this manner, before they later started shooting sporadically to kill more people. Audu added that they grabbed many babies from their mothers’ backs and sliced their throats after which they also killed the women.

“One of the women whose three-year-old child was snatched from her back is presently being treated at a hospital after she escaped with machete wounds. Our boys later found the mutilated body of her child in the bush yesterday,” the lawmaker said.

This is barbaric…. Those invaders must be animals from another planet with no blood flowing through their veins..