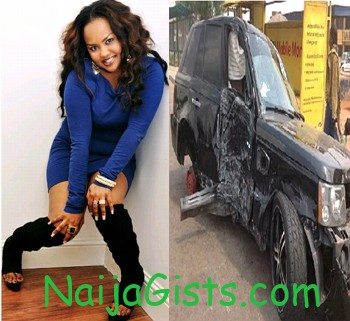 Beautiful Ghanaian actress Nana Ama McBrown who was seriously injured in a near-fatal auto accident in the wee hours of Wednesday the 30th of January 2013 is currently receiving emergency medical treatment. naijagists.com

According to Ghana Web, the actress escaped a serious injury and is currently in emergency ward.

Her aunt revealed that the actress’ vehicle in which she was traveling was involved in a crash on the Lapaz end of the N1 Highway around 2am while returning from a movie shoot with a man, Maxwell Mensah, suspected to be her boyfriend.

As at 13:00hrs, the actress, who had been receiving treatment at the Trauma/intensive care unit of the hospital, was moved to the Yaa Asantewaa Ward (F2) after her condition had been stabilized.

Mrs. Bernice Azuma, an aunt of the actress told newsmen that the incident was “not a fatal accident as it was said yesterday” and that “she is now ok and fine. She talked to me, she told me ‘mum I am ok’.”

According to her, broken glasses from the window of the Range Rover she was driving in injured the lower part of her arm and an x-ray on the arm showed that it was ok and should the condition worsen, doctors may apply P.O.P on it.

Mrs. Azuma however refuted reports that the victim was with the boyfriend when the incident occurred. According to her she left the movie location in the company of about two or three persons.

“They were about three or four” and she was with the owner of the car when the accident occurred.

Mrs. Bernice Azuma said medical personnel at the hospital told the family that the actress may be discharged in a week’s time. (Ghana Web)