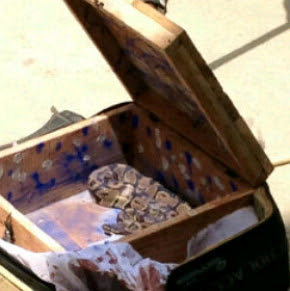 Around 3pm yesterday, a guy who schools in Houdegbe North American University Benin Republic (HNAUB) was arrested, due to his action of turning a fellow female student to a snake using supernatural powers.

The guys are said to be 100 Level Business Administration Students of the above named University, to cut the explanation short, they’re freshers who wants to make quick money,they want to drive exotic cars, blast un-worked for money as a result of oppressing their fellow students who happened to struggle hard to complete their education. 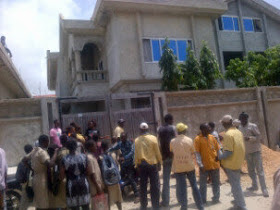 home of the suspected ritualists 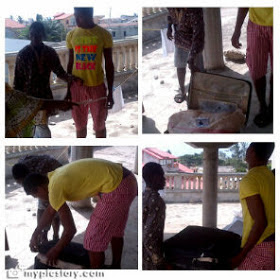 This culprit happened to travel to down to Port-Novo for the rituals according to the arrested guy. Pictures of two girls were found in the box which contained the snake.

The Snake in the box is actually one of the girls that was used,while the second girl’s head had already been chopped off.
It was a girl that stays in the same compound with them that noticed their strange movements and she therefore reported them to the police.

Am so sure that the guys in question did the alleged rituals just cause they wanna be tagged “Big Boys” on the campus. They want to be seen as the “popaholics” driving the latest automobiles, wanna use all sorts of electronic device (Iphone, iPad,BB10, BlackBerry Porsche e.t.c).

My advice as usual for girls goes thus “If he doesn’t live on his allowance from home or some creative and legitimate ways of making money aside yahoo yahoo, RUN FOR YOUR LIFE (Sare Kaba Kaba). Else You Gonna be Used One Day.