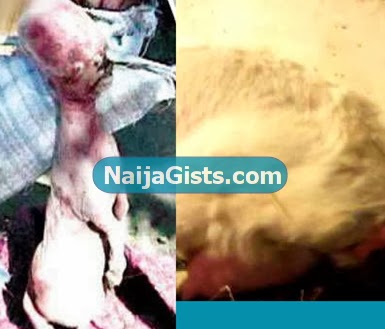 An unusual birth was witnessed yesterday in a remote city in Ekiti State.

In Ogotun Ekiti, a small town located inside the Ekiti SW LGA, residents were thrown into chaos after a viral story of a goat that gave birth to a human-like baby.

Sunday Ogunmeji, the spokesperson for the community told NAN that a pastor, Daniel Odedele helped in delivering the goat of the strange creature.

“After watching the goat labour for several hours, the pastor took pity on it and courageously pulled the baby out, only for it to turn out to be human-like. The `baby’ had all the features of a human being such as human face, head, hair, female genitals, two legs and two arms with hoofs.

“However, the human-like baby died at about noon as a result of lack of care as the crowd merely trooped there to watch rather than to attempt to save its life,’’ Ogunmeji said.

According to News Agency of Nigeria, an Okada rider who witnessed the strange birth said the mother goat immediately ran away on sighting the strange human-like baby she delivered.

He said the area residents were thrown into confusion on hearing the news.

Local security agents were alerted and after 2 hours on the run, the mother goat was recaptured in the bush.

Oh my! what could have gone wrong?