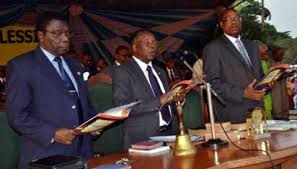 Christmas is a pagan festival because Jesus was not born in December, The God’s Kingdom Society (GKS) has declared.

The church said the popular December 25th celebration of Jesus birth has nothing to do with Jesus Christ.

Its Station Minister in Lagos zone, Brother Timothy Esimagbele, stated these last Sunday during GKS freedom day titled ‘There is nothing hidden that shall not be revealed’.

The service was to commemorate the birth of Jesus Christ in October.

Christmas, he said, was an ancient festival dedicated to the god Saturn, later adopted by early Christian leaders with the motive of converting pagans.

Esimagbele said GKS through assiduous study of the bible knew the truths about Jesus birth, which he said was found to have happened in October.

Buttressing the October date with biblical facts, Assistant Station Minister for Lagos zone, Brother Isaac Ennang, said in the sixth month of Elizabeth’s conception (December), the angel Gabriel was sent to a virgin called Mary to give her the message that by the miracle of God, she would conceive and bear a child to be called Jesus.

“Consequently upon the annunciation, Mary, no doubt, was in high spirit. With haste, she went straight to a city in the upland of Judah to meet Elizabeth,” he stated.

Ennang said that according to the gospel of Luke 1: 30, 40, and 56, Mary stayed with Elizabeth for about three months—January to March.

“The angel appeared to Mary in the sixth month of Elizabeth’s conception and Mary went stayed three months; six plus three equals nine, when Elizabeth gave birth in April.

“Having been equipped with this knowledge, let us now count Mary’s conception from January as was manifested in Elizabeth declaration. We will arrive at September as the nine month then in the tenth month, October, Jesus was born.”

He also said the fact that churches observe the death and resurrection of Jesus Christ in April confirms his birth could not have been in December.

“We all agree that Jesus lived for 33 and a half years. Now, let us admit he was born in December as some churches teach, it will mean, therefore, that his 33rdbirthday fell in December and six months later, in June, he was crucified; which is not true.”

Ennang explained with Jesus 33rd birth anniversary being in October and six months later will be in April, this argument pointed to the fact that Jesus was born in October, not December.

In his own message, read by Brother Esimagbele, President of God’s Kingdom Society, Brother Godwin Ifeacho, said those who give themselves to various sinful practices should retrace their steps and repent.

He said the birth of Jesus Christ was no doubt a world event and the gospels do not leave us in doubt about the universal scope of his mission.

He advises followers of Christ to serve in sincerity and in truth until the end for their blessings and salvation in the world to come.