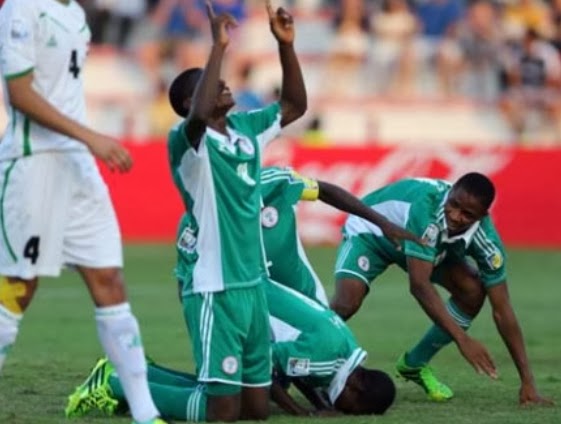 Golden Eaglets of Nigeria this evening thrashed Iran 4-1 in the ongoing FIFA U-17 World Cup round of 16 fixtures at the Sheikh Khalifa International Stadium, United Arab Emirates, UAE.

Goals from Samuel Okon, Kelechi Iheanacho, Mohammed Musa and Musa Yahaya in the 23th, 25th, 42th and 76th minutes respectively were all Nigeria needed to set up a quarter final match against Uruguay.

Nigeria started the game on a bright note with Iheanacho taking the first shot on goal that flew just some inches wide the far left post inside the opening minute.

The Eaglets continued the pressure and should have gone a head in the ninth minute but a quick reaction from the Iranian defence denied Taiwo Awoniyi from pouncing on Yahaya’s pass.

Sixteen minutes into the first half, the Iranians regained their composure and soon got the Nigerians on the back foot but they lacked creativity to threaten Eaglets defence.

The Eaglets responded well seven minutes later as Okon got on the score sheet to record his first goal of the tournament off a superb pass from Yahaya.

Iheanacho extended the Africans’ lead two minutes later for his fifth goal in four games after pouncing on Awoniyi’s pass on the edge of the area before making way for Chidera Ezeh with 14 minutes left to play in the first half.

Iheanacho could not continue the match after he was brought out and replaced by Ezeh in the 31st minute.

With three minutes left to play in the half, Eaglets skipper Mohammed Musa made it 3-0 through solo effort for Nigeria’s 17th goal of the tournament.

Eaglets’ goalie, Dele Alampasu had to be at his best two minutes later to deny the Iranians the chance to reduce the deficit.

The Iranians threatened to reduce the tally in the second half but poor finishing robbed them of the chance to score.

Eaglets who have been in superb form since the beginning of the tournament controlled all departments of the game. Yahaya scored the fourth goal in the 76th minute, before Ali Gholizadeh scored a consolatory goa for the Iranians in the 84th minute.

Yahaya missed a clear chance that would have been the fifth goals for Eaglets in the 90th minute.