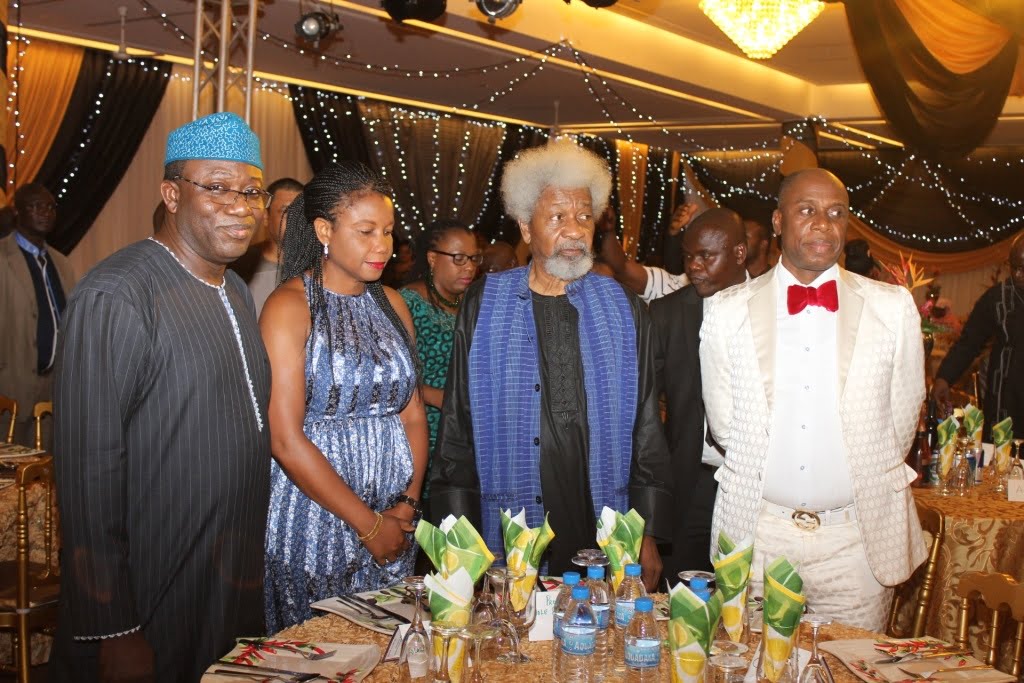 August 8, 2014 – A Tribute To My Mentor Prof Wole Soyinka By Governor Kayode Fayemi

I must start by commending my brother governor and friend, His Excellency Rt. Hon. Rotimi Amaechi, for putting this befitting banquet together in honour of one of the greatest men alive today. I must confess that giving a tribute in honour of Prof. Wole Soyinka is a daunting task. Obviously, he is acclaimed as the first Af­rican Nobel laureate in literature – which is no mean achievement – but such is the vast expanse of his footprints in the sands of time that to harp only on his stellar lit­erary accomplishments is to risk being ac­cused of simple-mindedness or courting the danger of a single story in the words of another rising star in the literary world, our very own Chimamanda Adichie.

The truth is that the celebrant defies easy categorization. He is an academic, who shunned the cloistered life of the ivory tower in favour of a lifelong radical engagement with the forces of retrogression in our society. He is a cultural activist, who, once, cautioned against the dangers of reverse racism and inverted bigotry inherent in the Negritude movement. He is a radical activist, who was comfortable wielding the bullhorn behind barricades, but also did not shrink back from the opportunity to wield public office for a good cause, hence his pioneer leadership of the Federal Road Safety Commission.

He is a pacifist, who suffered imprisonment during the civil war for trying to broker peace between the federal authorities and the secessionist forces, but, who during the darkest days of military dictatorship, was willing to use every means necessary to dislodge the totalitarian tyranny of the day.

He is a patriot, who abhors nationalistic jingoism or bigotry and prejudice of any kind and locates himself in the universal congregation of humanity as a humanist. As a writer, Soyinka speaks to society through his art but also sees society itself as a canvas for his quest for a more humane and habitable world.

Such is the sheer breadth of his life’s voyage and the weight of his presence at various critical moments of our nation’s history. Despite his prime place in the illustrious pantheon of writers globally, Soyinka steadfastly repudiates the limited stereotypical role of the aloof intellectual who is permanently stationed at the margins of society and offers the occasional platitude. On the contrary, he has long thrown himself headlong into a passionate and intense engagement with our society’s travails.

To those who deny and despise human complexity, Soyinka is frustrating because he cannot be easily or simply classified. To ideological purists, he is a heretic of sorts, because he abhors the intolerance and extremism latent in rigid adherence to ideological nostrums.

Perhaps, it is altogether safer to describe Soyinka as a man who goes where his conscience leads him. He is at once a playwright, poet, polemicist, prophet, protester and political activist. He is a wandering spirit, whose moorings are to be found in the liberal humanist tradition, a shape shifter whose substance is his conscience. Soyinka is like that proverbial elephant, who is perceived differently by different observers each grappling with various dimensions of his persona.

On a personal note, I was born about the time referred to by Soyinka as the penkelemes years (Soyinka, Ibadan: A memoir 1946-1965, 1994); a child of Western Nigeria during the region’s years of turmoil and turbulence in the 1960s. At that time, Soyinka was a folkloric figure, whose public persona was a marked departure from the key actors of that time. The years of the peculiar mess of cynical politics that was totally devoid of any pretence to public service or personal integrity.

Much later, as a student activist in the 1980s, we, in the student’s movement, saw him as an elder statesman in the community of conscience – one of the few elder activists that we could count on to be on the right side of the struggle.

Years later, a combination of fate and the vicissitudes of our country’s troubles would cross our paths in the pro-democracy movement of the 1990s. In those difficult days in exile, I was privileged to have him as a mentor and as a comrade-in-arms with whom the younger activists fought shoulder to shoulder. Or perhaps I should say that we stood on the broad shoulders of this giant.

Despite his international profile, Soyinka never restricted his activism in exile to chanceries and sanctums of power. He was very much in the trenches with us, an influence by example, involved in the organization of different initiatives, such as Radio Kudirat and the National Liberation Council of Nigeria, which articulated a more uncompromising and militant opposition to military tyranny. In the process, he dared the crosshairs of the dictator’s death squads but not once was he anything other than an unwavering presence, a fiercely immovable rock of patriotic opposition to the evil that had befallen our land and a towering and encouraging moral presence in our midst.

Naturally, such an engaged life earns one both admirers and adversaries. Soyinka has made his fair share of both. But no one can accuse Soyinka of desertion, of not being involved or of going missing at critical times. A man with so rich a life’s experience is entitled to take a break or to go on terminal leave from the patriotic work of troubling a complacent elite and stirring society to its calling. He has, after all, paid his dues. He has lost friends and comrades, some cruelly snatched from him by the forces of violence, and others who have slipped quietly into the winter of existence. Soyinka has rightly had to slow down not just or even mostly because of the limitations imposed by age, but, because he is, to use an infamous phrase, “stepping aside,” to enable the younger generation to take centre stage. Even so, this is no permanent retirement for him. Soyinka still lectures, instructing the national mind. He still graces the barricades, still invigorates the ranks of the present day comrades in progressive struggles with the sheer moral potency of his presence.

On a night like this, it would be negligent on my part to fail to acknowledge that our country is going through very difficult times. We are facing arguably the deadliest existential threat that we have encountered since the civil war. The plague of terrorism has come upon our shores like the grim reaper leaving death and destruction in its wake as a now daily normalcy. It is worth noting that Soyinka has long alerted us to the perils of extremism and intolerance. For several decades, he has drawn attention to what he calls “the credo of being and nothingness”; to the shift in the tenor of public discourse from the conventional dialectic of “I am right and you are wrong” to the anarchic “I am right and you are dead” paradigm. The current virulent manifestation of nihilism and fascism in the garments of religion are a terrible fulfillment of Soyinka’s prophetic admonitions that have been little heeded. They are also a testament to his foresight.

Let me conclude by citing some of Soyinka’s own words. During the civil war, the federal regime had a slogan: “To keep Nigeria one is a task that must be done.” Soyinka revised and offered a more instructive assertion – “To keep Nigeria one, justice must be done.” This statement sums up Soyinka’s earthly adventure, which, according to him is the first condition of humanity. It is a quest for justice that he leaves us as a legacy. Years ago, in 1984 to be precise, Soyinka authored one of the most incisive critiques of contemporary Nigeria entitled The Wasted Generation in which he essentially indicted his generation for not having resolved the crisis of our nationhood. As we commemorate the eightieth year of this illustrious son of Africa, this gift to the world from our shores, I would like to say that the celebrant has lived a rich, full and inspirationally purposeful life. There has been nothing wasted about him at all even as our country remains an open sore of the continent.

I join all men and women of good conscience the world over, to celebrate my mentor and, I dare say friend, but more aptly, a father figure in whom I find the safety of good counsel at critical points in my own mortal journey.

Continue Reading
You may also like...
Related Topics:Fayemi, Soyinka, tribute