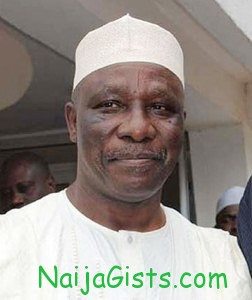 With sincere sympathy, we are announcing to you the death of Kaduna State Governor Patrick Yakowa who died today in a fatal helicopter crash that took place in Bayelsa state. naijagists.com

NaijaGists.com learnt that the popular Governor was declared dead when the helicopter he boarded from Bayelsa crashed at Ogbia creek in President Jonathan’s home state around 5pm today.

Several dignitaries who are on the plane include General Owoye Azazi who was also declared dead.

Nigeria as a whole and the all  indigenes of Kaduna state will greatly miss this wonderful Governor.

As at the time of this report, NEMA has activated a search an rescue mission for the victims of Bayelsa Helicopter crash.

The helicopter bursted into flames before crashing into the popular Ogbia creek in Okoroba community located in Nembe local government area of Bayelsa state.

This is one of the top plane crash that happened in Nigeria this year.

We could remember that in June of this year, 163 died tragically in a plane crash that happened in Iju Ishaga area of Lagos State Nigeria.

He will be greatly missed. May God console his grieving family.