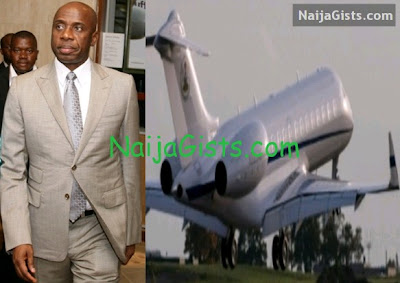 The Grounding of Rivers State Aircraft: My Story —- Governor Amaechi

We had set out from Abuja in the morning of Friday April 26, 2013 to Imo State to attend the funeral rites of the younger sister of the Deputy Speaker of the House of Representatives Hon. Emeka Ihedioha. Our plane, a Bombardier jet owned by the Rivers State Government, landed at the airport in Owerri. It was in Owerri that the pilot of our plane was first tipped off that there is a plot to ground our plane in Owerri that Friday.

Fortunately for us, we took off from Owerri airport and arrived at Akure airport en-route to Ekiti for the burial of the Deputy Governor of Ekiti State Funmilayo Olayinka without any incident. On the flight to Akure was the Speaker of the House of Representatives Rt. Hon. Aminu Tambuwal who we met in Imo State and was also heading to Ekiti for the burial of Mrs Olayinka. Also on the flight were the Governor of Rivers State Rt. Hon, Chibuike Rotimi Amaechi, the Director-General, Nigeria Governors’ Forum(NGF), Asishana Bayo Okauru, Kalabari prince and politician Prince Tonye Princewill, some aides of the Governor and me.

Once our party left the Akure airport for Ekiti, our pilot went to the airport offices to make statutory airport payments and fees, file his flight plan and declare his manifest. After filing his fight plan and declaring his manifest, our pilot was told to go and see the Controller. The Controller bluntly told him that the Rivers Government plane would not be allowed to leave the airport. In other words, the plane had been grounded! He said that the plane should have been grounded in Owerri. The Controller on duty at the airport in Akure mentioned some vague issues relating to the customs papers of the plane, which has been flying in Nigeria for many months? That didn’t make any sense to the pilot. He enquired on whose orders the plane was being grounded, he was told that it was the Managing Director of the Nigerian Airspace Management Authority (NAMA). And that he should reach the NAMA MD.

By the time our party, which now included four House of Representatives Honourable members- Mohammed Sani Idris Kutigi, Daniel Rayeineju, Idris Ahmed Wase and Ifedayo Abegunde- returned to the Akure airport, there was confusion everywhere. Speaker Tambuwal, the Honourable members and Governor Amaechi and his team, were all stranded at the airport. The plane that brought Speaker Tambuwal and Governor Amaechi to Akure could not leave Akure airport. Calls were being made as these two democratically elected leaders, furious and perplexed, tried to fathom what could have caused this monumental embarrassment to them and their offices.

After trying fruitlessly for some time to get the plane released, Speaker Tambuwal then offered to fly Governor Amaechi to Port Harcourt with the plane(another small aircraft) that brought the other four Honourable members to Akure. To accommodate Governor Amaechi in the small aircraft, one of the House of Representatives members offered his seat to the Governor .

The pilot of the Rivers State Government plane was already locking up the aircraft for us to leave for Lagos by road when a call eventually came through that the plane could now leave. The Controller received a directive to allow the plane fly out of Akure. The decision to let us go, we later learnt, was due to the pressure brought on the aviation authorities by Speaker Tambuwal.

It is indeed most shameful and ludicrous that NAMA and the Aviation authorities are now saying that they grounded the Rivers State Government plane because the pilot did not file a flight plan and declare a manifest. That’s a blatant lie. A big fat one at that. The pilot filed the flight plan and manifest, and paid all the statutory airport fees and charges shortly after the plane arrived at the Akure airport in the afternoon. If the pilot filed a flight plan and manifest at the airports in Abuja and Owerri, where he flew from same day, why won’t he then do the same in Akure? It is instructive to note that all through the traumatic time we spent in Akure, no official of the airport or aviation staff came to tell Governor Amaechi that we were grounded because our pilot “refused to file a flight plan and manifest.” All they kept saying was that they were just obeying directives, it was beyond them and we should call Abuja. Speaker Tambuwal and the other four members of the House of Representatives are living witnesses to that charade.

NAMA and the aviation authorities should explain to Nigerians why an aircraft owned by a State government, that flew the Speaker of the House of Representatives, Hon. Aminu Tambuwal and a democratically elected Governor of a State who also is the chairman of the Nigeria Governors’ Forum, would be grounded at an airport for no just cause?