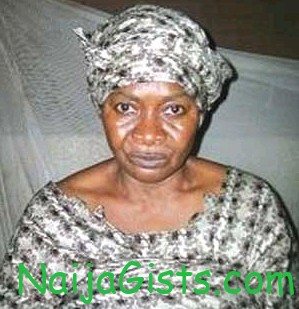 A 65-year old grandmother, who is also a mother of six, was on Wednesday arrested for alleged drug trafficking, the National Drug Law Enforcement Agency, NDLEA, said Thursday. naijagists.com

NDLEA said the suspect, Hassan Fatimat Abike, also known as Chika Okoye, was to board a British Airways plane at the Murtala Muhammed international airport in Lagos, southwest Nigeria, when she was arrested with substances suspected to be cocaine.

“Every arrangement appeared to have been made for a 65-year old grandmother to smuggle 1.740kg of cocaine into London in herbal syrup,” said Mitchell Ofoyeju, NDLEA Head of Public Affairs.

“It was not her fist time of going to London and the drug was cleverly packed to avoid detection. It was packed in balloons and inserted in ten plastic containers of herbal syrup,” Ofoyeju said.

He quoted the Airport Commander, Mr. Hamza Umar, as saying that the suspect had two international passports that bear Hassan Fatimat Abike.

“She was caught during the screening of British Airways passengers to London. The cocaine found in her possession was packed in balloons and prepared into the shape of the plastic bottles. It was also wrapped in black polythene inside 10 plastic bottles of local herbal mixtures. Each bottle was neatly sealed to avoid suspicion,” Umar was quoted as saying.

Preliminary investigation, NDLEA said, revealed that she is also known as Chika Okoye.

“She speaks Ibo and Yoruba fluently. Her father is a native of Abeokuta while her mother hails from Owerri, Imo State,” NDLEA said.

The agency said that the suspect currently lives alone in Owerri and sells clothes to earn a living.

NDLEA alleged that the suspect claimed ownership of the drug in a statement and explained that it was given to her by a friend. Chairman/Chief Executive of the NDLEA, Ahmadu Giade was quoted as saying that NDLEA is investigating her claim.

“The case is under investigation to ascertain her role. This is very worrisome considering the fact that she is a grandmother,” Giade was quoted as saying.

NDLEA said the suspect will soon be charged to court.(PM reports)