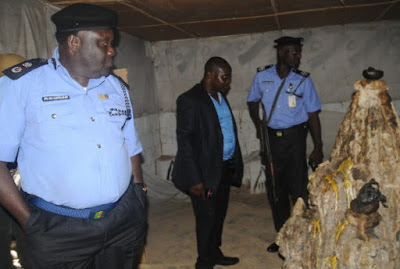 A judge in Osun state has sentenced 3 ritualists and an herbalist to death for killing an innocent man for money ritual.

84-year-old Oluwafemi Fagbemi and his clients were yesterday sentenced to death by hanging by Justice Kudirat Akano of an Osun State High Court in Ilesa for killing one Ajayi Jacob for money ritual.

The convicts, Tobi Ojo, Famutuwa Femi and Tope Olatunji allegedly approached Oluwafemi Fagbemi to help them in using their victim for money ritual.

On the 13th of April 2012, the convicts lured Ajayi to the herbalist’s home and butchered him. They removed his head, genital and part of his leg before dumping his headless body in a septic tank.

Justice Kudirat Akano found the 4 convicts guilty of murder and conspiracy and sentenced them to death by hanging with no option of appeal.