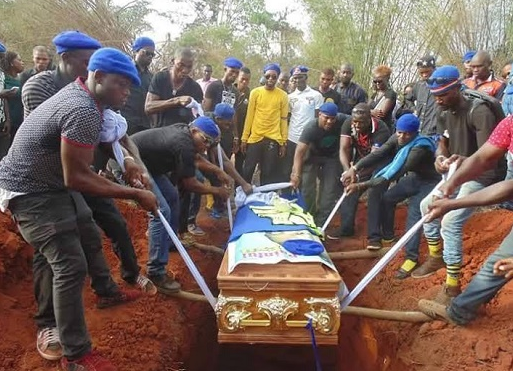 May 10, 2017 – The Hidden Danger Of Cultism: How The Youths Are Joining Cult Groups Out Of Boredom, Peer Pressure And For Fame & Wealth

So many young people are joining cults, or gangs, at an alarming rate. Never a day goes by, somewhere, that somebody doesn’t die as a result of cult activity which is sweeping across the country.

So you join a cult: perhaps out of boredom, peer pressure or thinking you can receive fame and fortune.

All of a sudden you have a new family. The cult feeds you and looks after you and tells you what to do. Your biological family, relatives and friends all become non-entities in your life as you swear an allegiance to the cult. The cult is now your new family.

You are told to beat people up and you do it.

You are told to kill people and you do it.

You are told to rob people and you do it.

You are told to partake in blood rituals and you do it.

Let me tell you.

Some people think joining a cult is like earning a badge of honour: they’ll be respected in society and looked up to – wrong !

A cult can be described in many ways but I’ll for the settle for the simple meaning of like-minded people gathering together and this can range from harmless people sharing a common interest to people who want to practice an extreme form of religion, like Boko Haram or ISIS, to spiritual cults that turn to the occult as a means of achieving what they want.

Unfortunately the common cults or gangs around today use spiritual means to enhance their criminal activity making them very dangerous people.

Most cults follow the ideology of their leader. They outline what the cult is all about- they write the rules and the regulations. And who is to say they are right? And who is there to challenge their belief? We can all see the ideologies of warped minded leaders of Boko Haram and ISIS and the chaos they are causing.

When you join a cult you are following the wishes and desires of your leader – not yours! You are just a foot soldier who will be sent to fight and die and do all their dirty work! Do you see any of the so-called leaders going anywhere with you? No! They send you the expendable cult members. You are expendable! If you become incapacitated or die you’ll be replaced, simple as that!

To become a cult member you have to undergo an initiation which amongst other things involves partaking in blood rituals.

Whilst undergoing these rituals do you know who or what you are really swearing allegiance to? The cult? But what powers the cult? What powers, spirits or demons do they use during initiation ceremonies? Without a doubt you aren’t told what is used that is a secret the leaders keep to themselves. And what are these ‘powers’ going to do to you should you decide to leave the cult and when you finally die? You’ve all heard stories about people who try to leave the Ogboni cult for instance.

The Whiteman always says there’s no such thing as a free lunch and that you should always read the small print. You can’t reap where you haven’t sown! What is the cult not telling you? What are they hiding from you? Do you have to pass your membership on to a family member down the generations? Are they going to take your life at an early age in return for fame and fortune?

I once knew someone who joined a cult because he was looking for fame and fortune – by all means. He didn’t want to work hard. He just wanted it to materialize overnight.

The cult he joined granted him his wish and he became very famous and rich (- sorry but I can’t mention his name!) but he died mysteriously a week before his thirtieth birthday. If I could speak to him I would like to ask whether it was worth it – he was only rich for three years and leaves behind a young wife and two children under the age of ten who will never know who their father was.

Is it worth it?

Remember that the minute you join a cult your life is no longer yours anymore – you belong to the cult and the cult will use you, destroy you and recruit somebody else to fill your vacant position. You mean nothing to them – you’re just cannon fodder! What if they order you to sacrifice one of your family members? You can’t say no because you would have enjoyed the benefits of other members’ sacrifices!

And when finally you die what becomes of your soul? If you have used these demonic spirits help during your earthly life they will be waiting for you on the other side and there is no saying what they’ll do to you – and they have until eternity to punish you! And all because you wanted instant fame and fortune by any means possible by joining cults.

Think twice before you join any so-called cult.

2 thoughts on “The Hidden Danger Of Cultism: How The Youths Are Joining Cult Groups For Fame & Wealth”