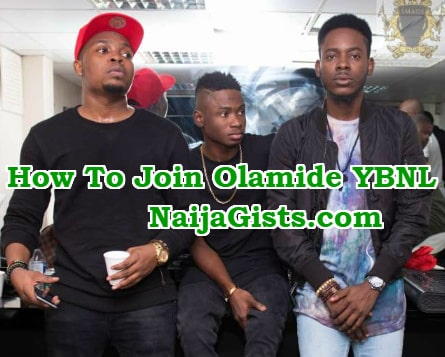 On the trail of YBNL Nation’s signing of young rap sensation, Picazo Rhap, many upcoming artistes are now clamouring to know which channel(s) they could go through, to get the attention of the record label owner, Olamide Adedeji, popularly called, Baddo. We have compiled for you the various channels you can go through, to get the attention of YBNL Nation and showcase your talent to Olamide.

Without doubt, there are a good number of highly talented music artistes out there, seeking a formidable platform to help launch their careers. Some have been lucky, while others have not been as lucky. In this regard, there are very few recording labels in Nigeria, whose prime objective is to develop talents and not to maximize profit. One of the leading record labels in this regard is Yahoo Boy No Laptop Nation, simply referred to as YBNL Nation.

Disregard the thuggish nature of YBNL acts and their music; Olamide has a well-structured management team, which oversees all administrative/managerial duties of the group. This team caters for Olamide and his crew. One of the main duties of this team is to discover talents.

If you believe in yourself and you have confidence in your music, try your luck by following the simple steps outlined below, to take your first shot at becoming a YBNL Nation’s artiste.

The above outlined steps constitute only one of many ways you can reach out to YBNL Nation. Read on to get enlightened about other ways.

Getting across to the YBNL team is not so difficult. The record label has mobile telephone lines, which are always available 24/7. These channels are specifically for show bookings and/or complaints. However, you can give it a dial if you are an aspiring YBNL Nation’s artiste. Here are the mobile lines:

Aside reaching out through the voice channels, you can also contact YBNL Nation through various social media platforms.

The record label has produced many artistes, who are now making waves in the Nigerian music scene. Some of these artistes have moved on from the label. They include Adekunle Gold, Lil Kesh, Chinko Ekun and Viktoh. These artistes are the first generation of musicians signed by Olamide to YBNL.  There are, however, a new crop of musicians under the record label. The current members of YBNL Nation include:

From the top; Picazo Rhap, Fireboy and Yomi Blaze are the latest additions to YBNL. The three young artistes were signed on Sunday, October 14, 2018. The signing of Picazo Rhap was what generated more fanfare on media, as the young rapper was already a star on popular social media sites, Twitter and Instagram. It was gathered that, the two of the new artistes, Picazo Rhap and Yomi Blaze, are close friends. The new signees were immediately featured on newly released songs titled YBNL Mafia and Juju.

Lyta and Limerick were the record label’s rookies prior to the arrival of the new artistes. Lyta recently released his latest single, titled Self Made.

Currently, Temmie Ovwasa and Davolee are the most prominent signees under YBNL Nation. Temmie Ovwasa is often regarded as YBNL princess, as she was the first female artiste to be signed by Olamide.

The record label operates two recording studios/offices in Lagos. One is in Lekki (Lagos Island), while the other one is in Olamide’s home base, Bariga (Lagos Mainland).

From 2012, when YBNL Nation was created, to date, seven albums have been released under the recording platform. Of the seven albums, Olamide has five releases, while Adekunle Gold and Lil Kesh have one apiece.

Below are outlines of the albums, from the most recent to the oldest.

Your album could be the next! Contact YBNL Nation now and try your luck.

Read How To Get Signed To DMW Record Label.