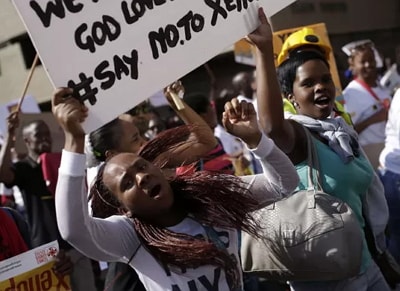 Nigeria has been a big brother to South Africa in this regard and immensely contributed to liberating South Africa from the clutches of the Apartheid regime. So one wonders why a country that has benefited so much from Nigeria would then turn to become so jealous of Nigeria that it would deliberately orchestrate premeditated killings of innocent Nigerian citizens living in South Africa.

This is completely unacceptable to Nigerians because the life of every citizen of Nigeria is important and very precious to us. We cannot afford to lose any more soul to mindless and cruel killings in South Africa anymore. These killings must stop henceforth. All Nigerians in South Africa must be protected by the government and security agencies. All Nigerians living in South Africa should first and foremost be law abiding but must equally rise up and protect themselves and defend themselves against any attack by any South African. After all there are many South Africans in Nigeria living, working and making a living for themselves without being harassed, maimed or killed. Nigeria is a free country and willingly allows many African countries to live and work in the country without any form of harassment.

So it is so surprising when South Africa cannot reciprocate these kind gestures by Nigeria. It is very clear that South Africa is an ingrate considering how immensely helpful Nigeria has been to her. African countries should be united and discard any form of rivalry and jealousy among themselves. There is no way Africa can be united as a continent with the way some countries especially South Africa exhibit hatred towards other African citizens. Nigerians are very hardworking people and anywhere you find them, they are very industrious and they succeed within a short period of time anywhere they travel to.

When Nigerians travel to South Africa to settle down, many of them succeed within a short time because they are very hard working and enterprising. So South Africans as a result of this are jealous of this and complain that Nigerians come to take over their jobs and opportunities. But it is totally uncalled for to be jealous of another person who is working hard to better his own life, instead you too should learn from him how he does it and apply it to your own life. The thing South Africans failed to realize is that Nigerians in South Africa help to develop their country and contribute immensely to their economy and should even be welcomed with open arms as no nation can fully develop without the contribution of citizens of other countries.

When the popular musician Lucky Dube was killed by armed bandits in South Africa many years ago, the killer bandits were eventually arrested and when interviewed, they said they killed Lucky Dube because they thought he was a Nigerian. That incident took place in the night and as they tried to snatch his car, Lucky Dube resisted them and he was shot and killed. This means that it is possible that their intention to have even snatched his car in the first place was borne out of their thought that he was a Nigerian. It also meant that if they had an inkling that he was a South African, they would have simply snatched his car if they actually wanted to without killing him in the process. But because of that inbuilt jealousy and hatred of Nigerian citizens in South Africa, he was shot and gruesomely murdered but unfortunately, they later discovered rather too late that he was their own blood. But Lucky Dube was popular and that was why his death could not be hidden from the world. What of the many other people, especially innocent Nigerians who have been murdered in this way in South Africa that no one got to hear about? What of the many young Nigerians who are daily hussling in South Africa who have been murdered without just cause?

The case of Lucky Dube shows that one of the prices you pay for hating innocent people is that sometimes in the process of trying to harm an innocent person, you will end up harming your own family. The gruesome and unchallenged killings of innocent Nigerians in South Africa cannot be swept under the carpet any longer. The life of every Nigerian citizen all over the world is sacrosanct. We can no longer tolerate this wickedness from the citizens of South Africa. We must all rise up to protect our citizens anywhere they are. Our brothers and sisters living in South Africa should no longer be murdered in cold blood while we fold our hands and do nothing. When the just fold their hands and do nothing, the wicked will continue to perpetrate injustice and wickedness.

When Nelson Mandela the former South African president was alive, he advocated African unity and was a father to all. He benefited so much after all his struggles, from Nigerian efforts towards liberating South Africa from Apartheid rule which for many years oppressed South African citizens. After freedom from the clutches of white minority rule, it is unthinkable that South Africa would now turn against Nigeria who incidentally was instrumental to their freedom. This should no longer be acceptable to the Nigerian people.

The government of Nigeria must immediately take this issue very seriously. One of the reasons why the killing of innocent Nigerians in South Africa persists is because the Nigerian government has over the years taken this issue with levity. No country can progress when its citizens are not protected wherever they are. The government of President Muhammadu Buhari has done little or nothing to stop these mindless killings. The government should now do more in this regard. President Buhari should interface with the new South African president and give him a strong word on this issue. There should be consequences for South Africa if these killings of Nigerian citizens continue. The life of every Nigerian citizen is sacrosanct and must be duly protected.

About the author: TAYO DEMOLA,Human Rights Advocate/Activist & Author writes from Lagos, Nigeria
He can be reached via tayobarrister@gmail.com

Buhari’s Approval Of $1Billion For Arms Purchase Violates The Constitution – Barrister Chris Akiri
What Are You Complaining About?