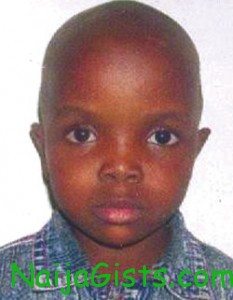 As I’m preparing to take a break from all day posting, I came across a very touching news in Vanguard. Read the details below.

There is confusion in Elshadai Foundation Ministry in Oke-Ira area of  Ogba, Lagos. The members are wondering why their pastor,  Pastor Tom Joseph is under arrest over the death of a six-year-old girl during a deliverance section.

The membership who usually assembles in an uncompleted building which also serves as their pastor’s abode has dwindled since he  was transferred to the dreaded homicide section of the State Criminal Investigations Department,SCID, Panti Yaba, for allegedly administering an olive oil on the six-year-old girl which allegedly led to her death.

How nurse started the trouble
Trouble, as gathered, started for the Pastor after the deceased mother, Mrs Duff,  reportedly visited the church with an ailment she claimed defiled medical treatment.

In her attempt to stop bearing children having had five already, Mrs Duff reportedly visited a nurse who injected something into her without the consent of her husband.  This turned out to be her greatest undoing as she was said to have started bleeding profusely.

Frightened by the development, she reportedly went to her own church, Apostolic Church, Ijaye Abatan Ogba district in the same Ogba,  for prayers. It was there that her husband got to know about her problem.

But while deliberating on  the issue, a woman among the congregation was said to have offered to take Mrs Duff to a place she would be cured.

According to Mrs Duff, “the woman earlier said she would take me to a nurse that works in Ikeja General Hospital. But we landed in Elshadai church, as she claimed the pastor was very powerful. After narrating my problem to the pastor, he demanded for the sum of N38,000 which was later reduced to N25,000. I paid and a meeting was fixed for January 17, 2012.”

On the appointed day, Mrs Duff, again, did not inform her husband. She was said to have left for the church with her children, immediately her husband left for work. But on reaching the church, the Pastor’s attention was shifted from Mrs Duff to her children.

Continuing, she stated , “ He told me it was revealed to him that my children were caged by satanic power and that they needed deliverance urgently. He then brought out a bottle of anointing oil (olive oil) and poured it into another bottle before giving  it to my two children, Joshua(9) and Victoria(6) to drink. Before giving them, he informed that  they would  vomit different kinds of things after taking it.”

New twist
But at the application of the oil , event took an alarming dimension as the children, Mrs Duff said,  started behaving funny. “ They started rolling on the floor as if they were in a trance and at a point, they slept off.  About an hour later, my  son  Joshua  woke up. But Victoria did not.  I noticed she was breathing slowly and could not talk.

“I became worried at this point. But the pastor said I should not worry, that she would come out of  the trance. I was no longer comfortable and therefore decided to wake Victoria up myself. And to my greatest shock, she was motionless. At this point, I alerted the pastor who sent for a bottle of Fanta. I also suggested they brought palm oil for her to, at least, neutralize whatever was inside the anointing oil. But the pastor claimed he had no palm oil at home.”

Tragedy struck
Apprehension set in at this point. Rather than rush  her daughter to the hospital,  she was reportedly taken to another church, where another round of prayer started.  Mrs Duff said she was asked to buy another olive oil which was used for a fresh round of deliverance but all was to no avail.

“ Some amount of  the olive oil I bought in the new church was poured on my daughter’s head as intensive prayers went on. Then the woman leading the prayer section closed the anointing oil and threw it away but the bottle did not break.

The woman then shook her head on noticing the bottle did not break. That was when I knew all was not well . We were advised to take the child to the hospital.  But by  then, it was too late as the child was confirmed dead at Urban Hospital located in Ogba,” she stated in tears.

Search for wife and children
Meanwhile, back home, Mr Friday Duff  was tense over the whereabouts of his wife and children. The father of five who waited patiently until 12 midnight without any information about them, concluded that they could either have been abducted or that  something terrible had happened to them.

Narrating to Crime Guard how he eventually got information about  his daughter’s death, Duff said, “  I slept off on the couch having waited that night. At about 5pm the following day, I heard a knock on the door followed by the voice of my only son who called for me to come and open the door. When I did , I saw him and another man carrying a child on his shoulder.

The man with the child happened to be a mechanic I had known at my former place of work. He simply asked if the children with him were mine . Without answering, I allowed him  in first. Then he threw the bomb shell that my daughter was dead. I asked where  she was and he pointed at the lifeless body of the child he was carrying. That was when it dawned on me that it was my daughter.

“I went berserk at that very moment and made for a cutlass.  But on second thought, I could not use it on him. Rather, I called my neighbours who rushed to my  apartment  to witness all that was going on. Without even touching the lifeless body, we all instructed him to take the child to the police station where he was arrested.”
At the station, the man was identified as Pastor Tom Joseph.

Testimony of the survivor
Nine-year-old Joshua when approached, told Crime Guard that but for the prayers he  muttered before taking the anointing oil, he would have probably died. According to him, “ the substance was harsh. It was poured into another bottle with black substance. Before the pastor gave it to us, he said we should just gulp it at once or else It would burn our mouth.

“But before I took mine, I prayed on it  and covered it with the blood of Jesus as we were taught in church. Then I took it gradually. But Victoria gulped it at once as instructed.  I believe the prayer saved me”, he said innocently.
Efforts to speak with the suspect failed as CrimeGaurd was told that investigation was still ongoing.

This story is pathetic