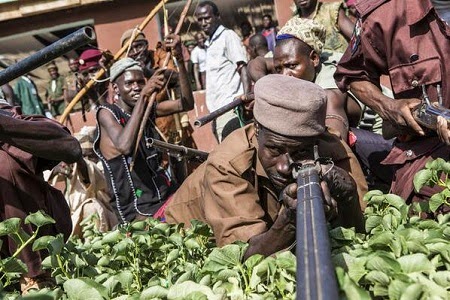 Armed with charms and unseen spiritual powers, courageous hunters based in Mubi town in Adamawa are mobilising to recapture Mubi from the grip of Boko Haram.

This followed the successful counter attack on the insugernts in Maiha LGA of Adamawa where the terrorists had earlier killed a Lieutenant Colonel and several soldiers during an ambush attack.

A resident of Maiha who escaped to Yola, told reporters that the local hunters, who mostly armed themselves with bows and arrows and black powers, decided to mobilise themselves to fight the insurgents following the alleged killing of the soldiers on Monday.

Sources in Adamawa say other hunters from the state are working with the Nigerian troops to take over towns captured by the terrorists.

The hunters are not alone in this battle, the State Governor Ngilari has donated 3 Toyota Hilux trucks and several ammunition to enable them to effectively combat the terrorists.