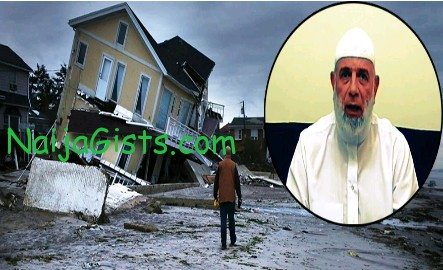 It earned nicknames like ‘superstorm’, on Halloween eve, and Frankenstorm because of the circumstance surrounding it and the magnitude of destruction it would leave behind after making landfall on the East Coast of U.S. on the evening of Monday October 29th, 2012.

Just as predicted, Sandy, ‘on Halloween eve lived up to its name. At one cemetery in Crisfield, Maryland, two caskets, one silver and one bronze, rose up from the ground as the sheer force of the water unleashed by Sandy swept the ground and dislodged the cement slabs covering the graves.

Sandy the ‘superstorm’ is not just super because a hurricane is meeting a northern blockage that will fuel its strength as it hits land as well as another western storm system, but because Sandy is set to strike the richest and most populated part of the U.S. Sandy was not an incredibly strong storm, with winds at 90mph but the most striking and destructive aspect of Sandy is its breadth—tropical-storm-force winds reached a radius of 520 nautical miles at one point.

Apparently only one in the Atlantic region has had a larger wind field, and bigger storms drive bigger storm surges. Sandy blasted the barrier islands along the coast, wrecking homes and businesses, destroying beaches and boardwalks, killing and leaving millions without power.

The aftermath of Superstorm Sandy has left at least 90 people dead and an economic damage that could run as high as $50 billion.

Though there is no straight cut answer as to why this disaster occurred, even scientists citing climate change are not in full agreement as to other contributory factors to the hurricane like size but some Radical Muslim clerics have given a clear cut answer. They are calling it an Act of God to punish America for anti-Muhammad film.

Tweeting from Egypt, Radical cleric, Wagdi Ghoneim described Hurricane Sandy as revenge from God for the crude, anti-Islam film made in the U.S. that sparked waves of protests in the Muslim world in September

‘Some people wonder about the hurricane in America and its causes,’

‘In my opinion, it is revenge from God for the beloved prophet,’ he added, referring to the film.

A Twitter response supporting Ghoneim, however, compared Sandy to a divine wind sent to destroy a sinful nation and strike at the seat of the United Nations in New York. “We asked God to destroy the UN building for its injustice, corruption, tyranny … with Sandy,” another retorted: “This hashtag doesn’t represent Muslims but represents a terrorist. We all ask God to help and save Americans.”

Many Muslims both in and out of the Muslim world disapproved the Egyptian cleric’s remark but the reactions to Superstorm Sandy in Saudi Arabia reflects the believe held by many in the kingdom that, the hurricane was indeed an act of Allah. Renowned Cleric Salman al-Audah of Saudi Arabia confirmed this theory by stating that the storm was a wake-up call for Americans to convert to Islam. However, in an interview on Thursday with Pan-Arab Al-Hayat daily, the Grand Mufti of Saudi Arabia, Abdel Aziz Al Sheik warned that rejoicing over plight of the suffering runs contrary to Islam, adding that Muslims were among the victims.

‘It is not legitimate and it is not proper’

Whether it was an act of God or climate change, Sandy will not only touch the lives of those it devastated in the U.S; but also those who depend on them for gift aids. Though countries are not falling over themselves to give financial support, it is alleged that, the Iranian Red Crescent are on standby to fly aid workers to New York to help with recovery efforts.(Credit: Tribuneng)

The guy didn’t even sympathize with thousands who were displaced and those who lost their lives.

Do you agree with him? Is Hurricane Sandy a revenge from God?