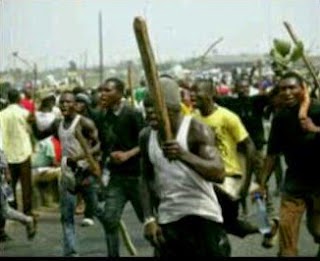 Two warring cult groups have unleashed terror on the quiet town of Ibaa in Emohua LGA of Rivers State Nigeria.

According to police report, the rivalry war claimed the lives of 10 people.

New Police Commissioner for the state, Dan Bature made this known yesterday during a visit to the troubled region.

Bature said the gang members injured many residents during the free-for-all attack.

The corpses of the victims have been deposited at the Mortuary in the area while the injured have been admitted to the hospital for treatment.

The police claimed that a longstanding chieftancy tussle in the area and the lingering political differences among stakeholders triggered the mayhem.

During his condolence visit to Ibaa town to console the families of the victims, CP Bature said: “I sympatise with all of you ( residents) over the unfortunate incident. I am in your midst to inform you that the police in the Rivers State command under my control will continue to provide maximum security to ensure all residents of this state will continue to sleep with their two eyes closed every day.”.

The CP said a manhunt has been launched to fish out the gang members.