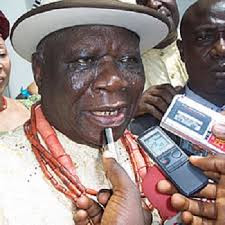 President Buhari has been advised to be wary of Ijaw elder statesman, Chief Edwin Clark and investigate him for corrupt practices.

The advice was contained in a statement issued by a non-government organisation; the Ijaw Justice Forum (IJF), signed by its President, Karona Etonye and Secretary, Ekenwan Akwagbe.

The group lamented the comments attributed to Chief Clark last the week in which he cast aspersions on the immediate past Nigerian president, Dr Goodluck Jonathan.

The Warri-based group recalled that Chief Clark’s comments were reminiscent of the sort of treatment he meted out to past governors of Delta state, from whose administrations he allegedly made immense gains.