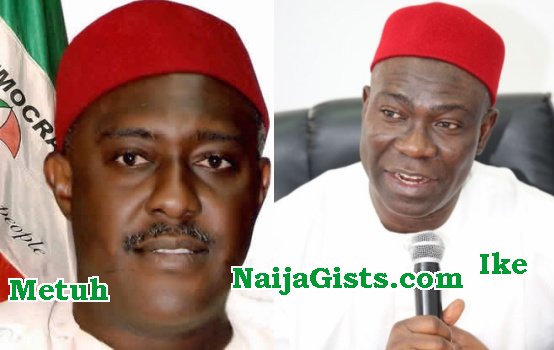 A prosecution witness in the case against former National Publicity Secretary of the PDP, Chief Olisa Metuh, resumed testimony before a Federal High Court in Abuja, with more revelations on how Metuh made cash payments to the Nigerian Television Authority (NTA), the Federal Radio Corporation of Nigerian (FRCN) and other media entities, who all benefited from the N400 million misappropriated arms fund for which he is standing trial.

Meanwhile, deputy Senate President, Ike Ekweremadu, has officially stood in as surety to Metuh, after one of his surety, Dr. Olugbumi Usim-Wilson, withdrew her sureteeship.

The witness, Mr. Richard Ihediwa, told justice Okon Abang that the Daily Trust, Champion and Newswatch newspapers were also paid in cash to launder the image of the president.

The witness who gave details of the account during cross examination by counsel to Destra Investment Limited, Mr. Torchukwu Onwugbufor, told the court that Metuh paid cash to one Segun Olatunji Jacobs of the Tribune newspaper, but added that he could not remember some of the newspaper houses that were paid in cash.

He said, the media campaign in support of former President Goodluck Jonathan became necessary because of the agitation from North, South-South, South-West and South-East.
“The issue of resource control, infrastructural development and the implementation of the recommendation from the National conference was threatening in the South-South,” he explained.

“In the North, there was the issue of insecurity. The agitation led to a lot of demand on the former president and he felt the best way to handle the agitation was through media publicity and public enlightenment instead of the use of the gun or force,” he said.

Earlier, a motion filed by Dr. Olugbumi Usim-Wilson seeking the withdrawal of her sureteeship for Metuh was heard.