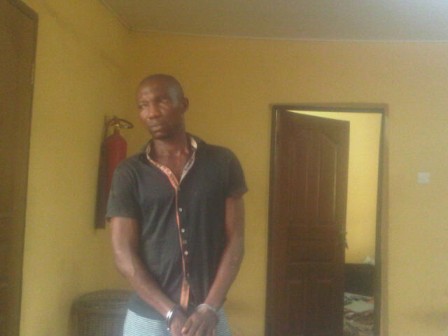 The man pictured above is currently cooling off at Kirikiri Prison for stealing.

The suspect identified as 34-year-old Uche Okpara paid Edo-born Prostitute Caroline Ibrahim N5000 for an overnight sex in a room she rented at a popular guest house on Aborishade street in Lawanson area of Lagos.

During the process, Caroline became weak and slept off. She alleged that when she woke up, Okpara who had paid her for all night sex had disappeared with her 90,000 Naira.

The matter was reported to the police at Itire division and Okpara was arrested and charged to court with stealing under the criminal code.

According to Ibrahim, Okpara was the last client she intended to have before travelling to her village.
She said she had hoped to use the stolen money to start another business and foreclose her prostitution job and settle down to marry.

Mr Okpara was arrested and charged to court today for stealing.

He was ordered to pay N20,000 bail with a surety in like sum but couldn’t fulfil his bail conditions.

The suspect was remanded in Kirikiri prison as his case was scheduled for trial on the 18th of January 2016.