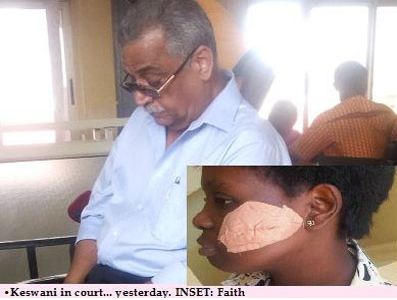 Jay Keswani, one of the Aswani brothers who attacked his wife’s PA, Faith Nwaneri on the left eye at his apartment in Ikoyi Lagos back in August has been charged.

The suspect was dragged to court yesterday and arraigned before Justice Osunsanmi at an Ikeja Magistrate’s court for hitting Faith Nwaneri with a bag containing tools which left her bleeding on the left eye.

The accused pleaded not guilty and was granted N100,000 bail with two sureties in like sum.