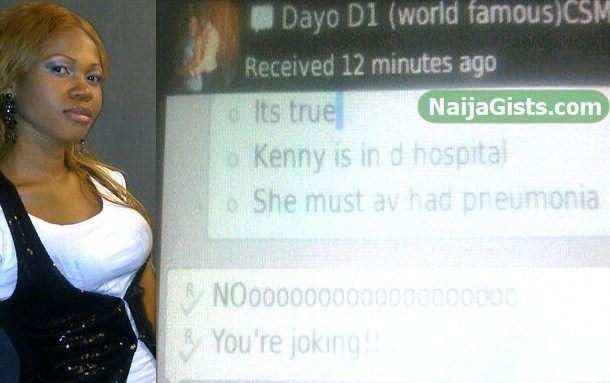 Before we go further, the death of Goldie Harvey is now confirmed. Mr Dayo D1 Adeneye, a friend of Kenny Ogungbe claimed Goldie died of Pneumonia.

Last night we learnt Nigerian singer Goldie Harvey is dead after a tweet from her official Twitter handle claimed she passed away at Reddington hospital in Victoria Island hours after her arrival from the United States Of America.

See the tweet that started the own thing below:

“It is with heavy heart that I have to inform you all that Goldie passed this night shortly after arriving Lagos from LA. May her soul rest in the eternal peace of the Lord – Admin!!”

This is Goldie’s ADMIN WRITING please accept what has happened and pray for her soul, in death we are all equal no matter our beef

Due to the controversial nature of this story, NaijaGists.com started an investigation that lasted for about an hour and we’ve concluded that Goldie Harvey might have died late last night but the controversial aspect is that Dayo D1 Adeneye and Kenny Ogungbe (the man who arrived Nigeria few hours ago with Goldie Harvey) are yet to update their Twitter pages though we have received a BBM confirmation from D1.

In order to ascertain if infact Goldie is dead or alive, we head straight to the official BBA twitter account for Goldie Harvey where we got more confirmation on her death.

Here are some conversations on Goldie Harvey’s death that points to the fact that she might have died.

Now confirmed!! RIP Goldie
She was brought in at 7:55 DEAD! Pls stop the F**king Rumours! Reddington hospital was not to blame!
Hearing them make mortuary Arrangements…. I have dieddddd! Please Lord this is Real! Have Mercy on her Soul!
Reddington hospital! Even the doctor is Crying! So Many Questions! An autopsy will tell us better!
Dear Lord please let this Goldie gist not be true please God! @DENRELE_EDUN pls bro pick your phone!!!

Here are some Tweets from N6OFLIFE

*left a while ago! By now her Body should be on d way 2d Mortuary!* @HoneyJWillis: @N6OFLIFE na wa o are u in d hospital

Let’s wait few more hours for more updates from Kenny Ogungbe who went to the hospital and Denrele Edun on Goldie Harvey’s death.

Back to Dayo D1 Adeneye’s confirmation, Pneumonia might have killed Goldie Harvey that resulted in breathing difficulty.

Pneumonia is an inflammatory condition of the lung—affecting primarily the microscopic air sacs known as alveoli. It is usually caused by infection with viruses or bacteria and less commonly other microorganisms, certain drugs and other conditions such as autoimmune diseases.Typical symptoms include a cough, chest pain, fever, and difficulty breathing.