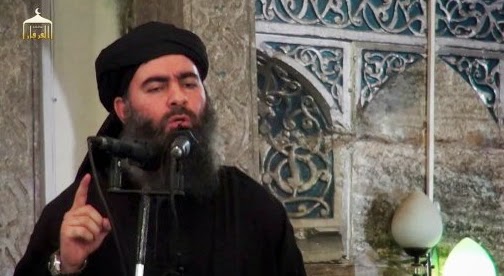 The islamic State of Iraq and Syria has now expanded its empire to a part of Nigeria, with the pledge of allegiance to Abu Bakr al-Baghdadi, the spiritual head, by under pressure, Boko Haram leader, Abubakar Shekau

An audio recording believed to be from Boko Haram’s leader Abubakar Shekau said the jihadists, who have been waging a six-year military campaign in northern Nigeria, were merging with ISIS.

A translation of the Arabic broadcast said: ‘We announce our allegiance to the Caliph… and will hear and obey in times of difficulty and prosperity.’

The recording identified ‘the Caliph’ as Abu Bakr al-Baghdadi, the leader of ISIS and self-proclaimed caliph of the Muslim world.

The message means that ISIS now has a foothold in Nigeria, as well as controlling swathes of Iraq and Syria and parts of Egypt and Libya.

Baghdadi has already accepted pledges of allegiance from other jihadist groups in the Middle East, Afghanistan, Pakistan and north Africa as he seeks to expand their reign of terror.