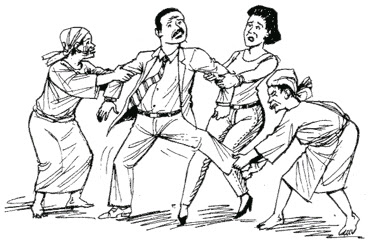 July 18, 2012 – A wealthy man identified as Onoja Uroko who is popularly known for his love for sex and women has met his untimely death in the hands of his six beautiful wives in Ugbugbu Owukpa, Ogbadibo LG area of Benue State, Nigeria.

On Tuesday July 17, 2012 at about 3am in the morning, Onoja Uroko was reported to have returned from a popular joint in the community.

We learnt he headed straight for his youngest wife’s room not knowing his other five wives had conspired to invade their privacy whenever he came in to her.

On that fateful morning, on sighting their husband inside the youngest wife’s room, the other 5 invaded the room with knives and sticks demanding that their husband have sex with all of them at once.

Uroko resisted their attack, but he was overpowered by the women who ordered that the sex march begin with the youngest wife and to continue in that order to the top.

He had however stopped breathing when the fifth woman was making her way to the bed. The youngest wife explains, “Suddenly, my husband stopped breathing, and they all ran out, still laughing, but when they saw that I could not resuscitate him, they all ran into the forest.” The deceased’s body has since been deposited in a nearby mortuary.

The village head, Okpe Odoh affirmed that the matter had been reported to the police and investigation was ongoing even as the youth of the community are helping the police in search of the escaped wives. Two of them have so far been apprehended.

The thing wey he sabi most kill am.