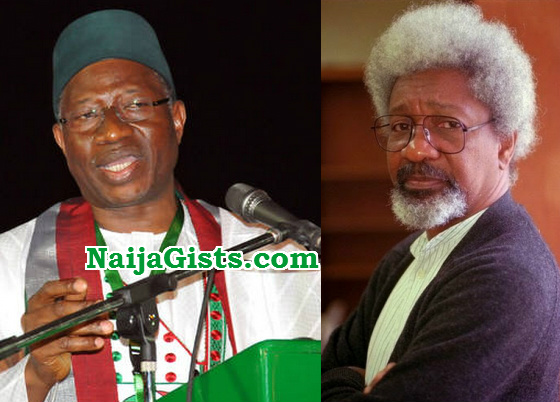 August 10, 2015 – “I Warned Ribadu To Beware Of Obasanjo, Jonathan Advisers Ruled Nigeria For Him, GEJ Was Clueless About His Duty As President” – Soyinka Opens Up In New Interview

Nobel Laureate, Prof. Wole Soyinka, has said ex-President Goodluck Jonathan was really caged by some forces while in office.

He said Jonathan did not know that the nation had been compromised.

He also said the ex-First Lady, Dame Patience Jonathan was loose and ought to be charged for incitement or chaos.

Soyinka, however, said he warned a former Chairman of the Economic and Financial Crimes Commission (EFCC), Mallam Nuhu Ribadu to beware of ex-President Olusegun Obasanjo.

The Nobel Laureate made the submissions in an interview he granted a team from Zero Tolerance Magazine, produced by the Media and Publicity unit of the Economic and Financial Crimes Commission (EFCC).

Soyinka said he met Jonathan on more than two occasions and it was obvious that the former President had no knowledge of what was going on.

He said: “Correct. There were forces around Jonathan, which he himself did not understand and that is why I stressed that, you’ve got to choose your circle of advisers very carefully, when you are in charge. He was caged; things were going on that he did not know about.

“And again, I am revealing this to you, since this won’t be published till after the elections because I won’t want to be seen as campaigning for or against one side. It shows in deep trouble governance can be, governance can dig itself into a huge hole and not even know it’s in there. The statement that was issued was issued the night when I met him.

“Oh! It is more than two occasions, but two in recent times. I will tell you one interesting aspect of what we discussed. I will reveal to you that Jonathan did not know that the nation had been compromised so badly in this telephone thing with the King of Morocco. I was the one who told him when we met over an issue and I said to him, ‘by the way, how is the King of Morocco? Jonathan didn’t know what I was talking about’.

“When I mentioned the telephone issue, he thought I was talking about his campaign for the AFDB managing director for which he was lobbying other Head of States. He said ‘I haven’t spoken to him in a long time,’ and I said ‘no, you spoke to him a few days ago.’

“He said ‘no, I intend to speak with him, I even asked my foreign ministry to link me up with him because I am campaigning for a candidate but I haven’t spoken to the King of Morocco’. Then I said to him, ‘You better go and read the newspapers of last week’. And I can tell you, he didn’t know.

“So can you imagine that the President did not know that a scandal had developed that involved a withdrawal of an ambassador?”

[Reported By Yusuf Alli, The Nation]

17 thoughts on ““Jonathan’s Advisers Ruled Nigeria For Him, GEJ Was Clueless, I Warned Ribadu Against OBJ” – Soyinka”