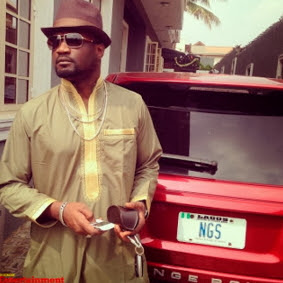 The elder brother of Psquare’s stars Peter and Paul Okoye has left their Squareville mansion in Omole for a new house recently completed by his younger brothers.

Jude shared a photo of himself in the the new mansion on Saturday with the caption “Thankful,” which fueled the rumours that he has moved out of the Square Ville.

On Friday morning, residents of Omole Estate woke up to the invasion of the Square Ville, home of Psquare, by policemen, purportedly carrying out a court order to reclaim about N8million said to have been paid to the artistes for a show they eventually turned down.

A leader of the delegation who spoke exclusively to NET said they were carrying out an order passed by the Ikeja High Court, Lagos.

“Psquare were paid over 8million Naira for a show and they didn’t show up for the show. Our job here is to enforce the court injunction and retrieve the cash. Right now they say they are trying to transfer the money and that’s why we are waiting.”

Prior to the incident, Peter had started a Twitter rant, calling it quits with their elder brother and manager, Jude. The matter appeared to subside after Paul took sides with Jude.

According to insiders, Jude is likely to ruin his brothers career due to his hatred for Peter Okoye’s wife, Lola Omotayo.