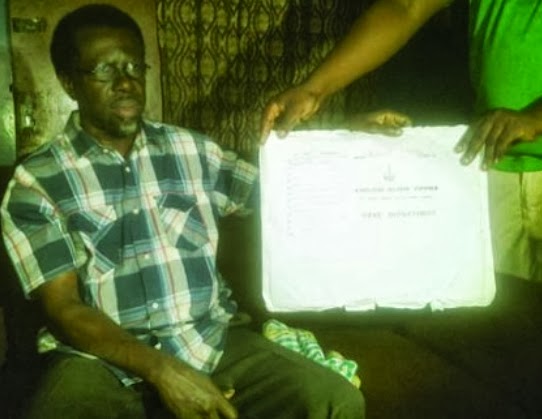 A man who used to put laughter on our faces is now down with serious life threatening diseases.

Veteran Nollywood actor Kayode Odumosu popularly called Pa Kasumu who survived stroke in 2011 is now down with a serious form of Parkinson’s disease.

The ailing actor who is now at his residence in Mushin area of Lagos state Nigeria is crying out to all kind-hearted Nigerians for financial help.

As we speak, the actor needs 12 million naira for an urgent life-saving medical treatment abroad.

“I want all Nigerians to help me out of this unfortunate situation that I find myself. I wouldn’t have bothered anybody with my problem if I am still agile and can move here and there to do my job, but unfortunately I couldn’t, as the sickness has weighed me down. I don’t have any money any longer after exhausting all my savings, as well as sold most of my properties.” the actor said, sobbing.

Narrating the genesis of the ailment, Odumosu said it all started in 2008, when he visited his family doctor for a checkup after he noticed some strange feelings. According to him, at the clinic, the doctor conducted a series of tests which produced uncomplimentary results. He was then referred to Lagos University Teaching Hospital, LUTH, for a comprehensive assessment. At LUTH, they later discovered that his heart, kidney and liver were not functioning properly after months of various examinations.

“Since 2009, I have been undergoing major cardio treatment in LUTH three times a week. Some times in a day, I will have between four and eight tests, and all these test were very expensive with some as high as N150,000,” Odumosu explained.

“We are shocked to hear of Kay’s ailment. He has never really complained to anybody about this, as we discovered that he has quietly managed the health problem without bothering anyone. Though, I know he is ill but never knew it was as grave as this,” said actor Jide Kosoko

To help him out please use his bank details below;

May God grant him quick recovery.