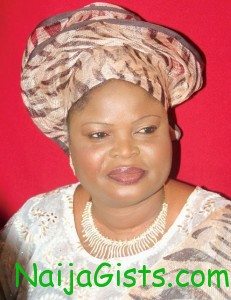 According to global news, these times are surely not the best of times for the Lagos Deputy Governor, Joke Adefulire.

Her husband who is a magistrate in Lagos State judiciary, has impregnated a lady (name withheld).

Those who are in the know alleged that Magistrate Adefulire of Igbosere Magistrate Court for some time now has been going out with the lady and many people close to him claimed that it was his wife’s long absences from home that made him to look elsewhere.

We gathered that since the former commissioner turned deputy governor joined full time politics, she has had little or no time for the husband because of her busy schedule and meetings here and there. naijagists.com

Global News learnt that when news of the alleged pregnancy got to the deputy governor at the Lagos State secretariat, she took it in her stride, saying that there was nothing she could do about it, adding that she cannot hold her husband’s manhood.

It would be recalled that the deputy governor was once married to Toyin Kembi who worked as a driver at the Lagos Orthopaedic Hospital, Igbobi, with whom she had four children before one of them died.