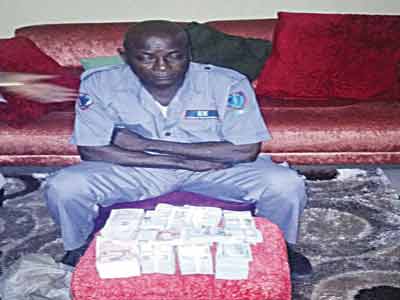 The suspect, Bolaji Oyekanmi, was arrested by policemen from Ilupeju station. Bolaji said he and others now at large, have robbed Bankers’ Warehouse of the whop­ping amount.

He confessed that the money was kept with a na­tive doctor.

The Divisional Police Officer (DPO) for Ilupeju, Mr. Olayinka Egbeyemi, led operatives to the house of the native doctor where the money was recovered.

After the recovery, CP Owoseni ordered the DPO to immediately hand over the money to the Bankers’ Warehouse.

The DPO was said to have handed over the mon­ey to its owner.

A manager of the Bank­ers’ Warehouse, who spoke to Crime Watch Today on condition of anonymity, said:

“I have never seen po­licing in this way. Imme­diately the money was re­covered, the DPO called us and handed over the money to us without removing a kobo. He also ordered his anti-robbery team to escort us back to the office.

The Commissioner of Police who confirmed the arrest said the suspect would soon be charged to court.