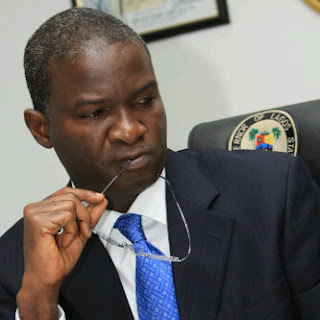 Governor Babatunde Fashola of Lagos State today presented a budget of N489.69 billion to the State House of Assembly for approval for the 2014 fiscal year.

The budget shows a drop by N10 billion of what was budgeted in 2013, which was N499.604 billion. This is the first time the Lagos State Government recorded a drop in its budget in 14 years since the democratic dispensation in 1999.

The budget is made up of N234.665 billion recurrent expenditure and N255.025 billion capital expenditure.

“Because this is the last full year budget that my administration will implement, it represents a slight reduction in budget size when compared with the 2013 budget. Its focus will be to complete on-going projects, and consolidate on the gains we have made,” he said.

Others include completion of on-going High/Magistrates’ Courts projects, Renovation/Rehabilitation of Court Rooms and Judges Chambers and Improving Safety and Disaster Management.

“One of our programmes that we will be paying attenition to is the Residents’ Registration exercise. As I said at the launch, it is for residents of Lagos and no more. It seeks to register everybody who intends to live here for up to 6 (six) months and beyond irrespective of where they come from.

“I have issued Executive Orders to the entire Public Service to amend our forms and processes to request the provision of the citizens’ registration number which is provided whenever you register. With effect from the 1st of December 2013, it will be a requirement in terms of information to be provided in order to enable us to provide service to you or process requests from you,” he explained.

The governor urged all to either go to the nearest Local Government office to them to register, or do so online at the Agency’s website or engage the mobile registration team, saying that “there is continuous information on the radio, television and our state website about how the process works.

“I am convinced that, as soon as you start providing us with your registration numbers, our capacity to respond to your requests will get faster and better. Our electronic Certificate of Occupancy programme is almost completed. I have signed some of them already and very soon we will start releasing the certificates.”