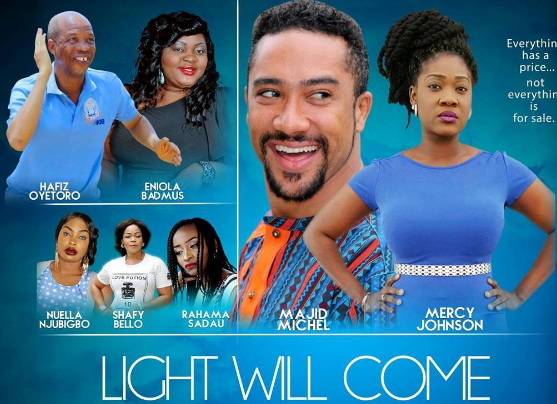 A new movie from the stable of Tchidi Chikere’s Filmbaba Entertainment Limited “Light Will Come” will be showing in cinemas across Naija on the 17th of February 2017.

Shot with red epic camera alongside a dexterous cast and crew, Light Will Come is indeed an entertaining movie guaranteed to be a box office hit. According to Chikere, shooting of the film commenced in August 2015 and ended in January 2016, while post production began in February 2016 and was completed in December.

The movie tells the story of Lukas (Hafiz Oyetoro), a bumbling and comical PAto his chronic bachelor boss, Raymond (Majid Michel). Raymond’s parents mandated him to get married and the desperate search together with Lukas to find the ideal woman his elite parents would approve of goes wrong repeatedly.

Time is running out on Raymond and he secretly engages the services of an escort agency that presents Jessica (Nuella Njubigbo) to pose as his fiancée, but the plan ends in disaster. There comes Viola (Mercy Johnson) who agrees to the plan but there’s a snag, as they are both from different worlds. The web of deceit is continuously spun before Raymond’s parents until something finally goes wrong.

“Society makes huge demands from the individual and often times the individual bows to these pressures by taking drastic measures. Light Will Come reveals how a good thing can come out of a bad situation and that no one should write off anybody, for we all deserve as many chances as possible.

“We’ve left no stone unturned in ensuring that the film meets the high cinematic standard hinged on an awesome well-told story that the audience will find highly entertaining.