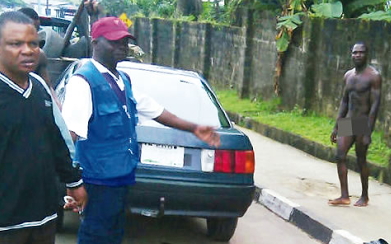 A 35-year-old man reportedly walked about naked to earn the sum of N10,000 in a challenge thrown at him by his friends in Abuja.

Many residents of Kabayi, Maraba area of Abuja were left stunned when a man, believed to be in his 30s, was seen walking about naked solely to earn N10,000.

Daily Trust reports that the man whose identity drama was yet to be disclosed, started attracting attention when he decided to prove to his friends that he could do anything for money.

It was further reported that after being challenged by his friends, the man accepted the challenge and stripped himself of all clothing materials to walk about naked.

An eyewitness reportedly said: “I couldn’t believe it but it is real. I saw people running to have a glimpse while others, maybe scared, stayed away.”

After the parade, the man reportedly got his N10,000 prize money and walked away even as residents watched him in dismay.