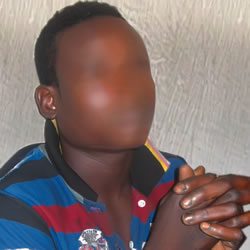 A young man (name withheld) has been arrested in Ibadan for sending threatening text messages (SMS) to an unknown person. naijagists.com

Nemesis caught up with the man who was a suspect of similar threatening text messages after sending his usual kidnapping SMS to Mr Agboola Agbaje, the CEO of Agriforth Merchant Limited in Ibadan Oyo State Nigeria.

Agbaje said he received the message below after rendering an assistance to a stranger:

“Kidnappers are after you. I know them. They are seven in number. Do not tell the police because they will soon kidnap you….some text missing.”

Contrary to the instruction on the SMS, Agbaje immediately called a friend who is a DPO and informed him with the intention of getting protection from kidnappers.

The DPO, Agbaje said, assured him that he would look into the issue.

“Consequently, I began to make calls, asking those who may know how we can get the sender. Our efforts yielded fruits, as we got his address contact and he was arrested,” Agbaje added.

He disclosed that he later went to the station and gave the DPO his mobile set to read the threat message sent to him.

“After reading the message, the DPO told me that the sender did not mean any harm with the message and there are no kidnappers trailing me. He added that such a message was once sent to him that the message was incomplete on my phone.

“He then showed me the one on his phone, which is the exact message sent to me, with the addition: “…the kidnappers are joy, peace, happiness, riches and every good thing of life.”

When Wakabaout asked whether the heavy hands of the police were laid on the man, he said, no, “because they were still waiting for the arrival of the DPO, since he was the one who called for his arrest.”

Agbaje disclosed that the spate of kidnapping and bombing, among others, had called for every Nigerian to be vigilant and ensure his security and that was what informed his decision to report the case to the police.

Meanwhile, the same incident happened to a retired military man. And just like Agbaje, he reported to the DPO, Eleyele police station and ensured the arrest of the sender of the message, before discovering the innocence of the sender.

Wakabout gathered that a majority of Nigerians react negatively to satiric text messages when they receive it, especially when they are not in the right frame of mind or do not really trust the sender of such messages.(Source: Tribune Walkabout)