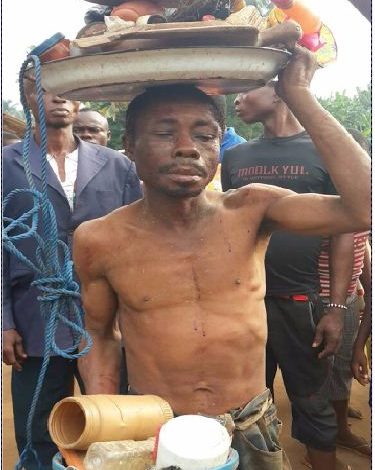 June 25, 21017 – Man Sent Away From His Village By Kinsmen In Abia State For Practicing Witchcraft Petitions Inspector General of Police

An indigene of Umuokenyi – Ndiolumbe, Nvosi in Isiala Ngwa South Local Government Area of Abia State who is in his 40’s , Esau Ihemeje may not be able to step into his village in the next 14 years.

His offence was that he was accused by his kinsmen for being involved in witchcraft which led the entire community to jointly banish him from the community after he was severely tortured.

But before Ihemeje left the village, he was also handed down some of the things that he would buy which would be used to perform some rituals after serving his ban as a condition and process of being reintegrated back to the society.

One of the conditions for his reintegration was that he must bring nine cartons of beer, nine crates of malt, nine cartons of Legend beer, three bottles of hot drinks, three jars of palm wine, 36 pieces of kola nut, 36 alligator pepper and a fine of N20, 000.

Ihemeje who denied any wrong doing claimed that he signed the handwritten undertaking under compulsion by his kinsmen before ostracizing him.

Worst still is that contrary to Igbo tradition where someone goes to his or her maternal village when in conflict with his people, the people of Umuanunu in Obingwa Local Government Area of the state have equally rejected him after they were told of the crime for which his kinsmen ostracized him.

Ihemeje who was said to have suffered loss of memory as a result of the beating and injury he sustained during his beating by his kinsmen is said to be taking refuge in a relation’s apartment in Lagos at the moment.

In a narrative to what transpired between him and his kinsmen that led to his ousting from the community, Ihemeje said “On May 2, I was in front of our compound at Ndiolumbe around 2:00am when one Monday Agbara and Chisom Agbara led some other men into our compound. I demanded to know why they came at that time to my house and they told me they are vigilante members. I then asked them whether it was in our compound they were deployed to watch over that night. I told them that if there was anything like vigilante that all members of the community should be made to be aware through a town crier, that it was not just one family that should form the vigilante.

“Before I could say any other thing, they accused me of witchcraft. As we were still talking one of them by name Monday Agbara gripped me and was assisted by Chijioke Igbodiegwu Agbara, Chisom Agbara, Ibe Agbara, Uchendu Agbara, Chisom Marcus Ihemeje. They carried me that early morning to another compound and threatened to deal with me. At a point, they wanted to use the machete to cut off my two legs, God saved me but the deep cuts are still there on my legs.”

He accused his kinsmen of forcing his door open and destroying all his household property after which he was stripped naked and carried to his maternal home at Umuanunu village in Obingwa Local Government, as customs demanded.

According to him, “My maternal relations objected to the action of my people and asked them to take me back to my home, insisting that the way I was treated was an infringement on my human rights. But surprisingly, when I went back, these people used machete to pursue me, insisting they will kill me and eat my meat if I stepped my foot on the community.”

Ihemeje’s elder brother, Patrick, corroborating his young brother’s story stated that their kinsmen beat the younger brother “out of human tolerance” insisting there was no way his brother would be called a witch and people went into his house and destroyed his property and nothing happened to them.

But his kinsmen speaking in one voice alleged that he was a witch and that he had become a terror to the community through his witchcraft practice. They affirmed that he has been banished to Umuanunu his maternal home in line with the custom of the area. They, however, denied brutalizing and torturing him, insisting that whatever injuries he sustained was inflicted on him by the people of his maternal home who might have felt disgraced by his actions at Ndiolumbe.

The traditional ruler of Ndiolumbe community, HRH (Eze) Godwin Ogbonna who is a retired banker said although he does not know the accused, but for the fact that it was established he is a witch, what the villagers did was in line with tradition and custom.

“We do not have room for the practice of witchcraft in this community and anybody that is found to be involved; my people do not take it kindly with that person. So, banishing him to his maternal home was the right thing to be done and I’m still waiting for the people of Umuanunu, his maternal home to bring him to me in line with our custom so that I can look into his case and hopefully broker peace.”

But a human rights organization, led by Nelson Nnanna Nwafor, Executive Director of Foundation for Environmental Rights, Advocacy and Development (FENRAD) has stepped into the matter to seek justice for Ihemeje.

FENRAD has petitioned the Inspector General of Police (IGP), Ibrahim Idris as it believed that even if Ihemeje had done anything wrong, the right thing to do could have been for him to be treated according to the law instead of being beaten, battered and brutalized.