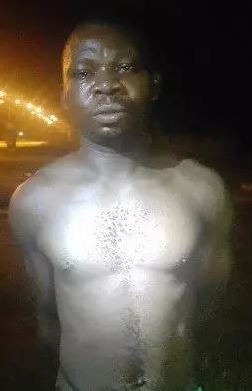 April 5, 2017 – Man Who Killed Uncle Over Land Dispute In Enugu & Buried Him In Shallow Grave Blames The Devil After Arrest

A middle aged man has been arrested for allegedly killing his uncle in Enugu state over a family land dispute.

On Saturday the 4th of March 2017, the suspect Daniel Ekemezie alias Bakassi went to the house of the deceased, 83-year-old Pa Patrick Odoh to settle the land dispute.

The resident of Ukpata Community reportedly used duct tape to cover the mouth of his uncle and took him to a forest in the community where he allegedly tied him to a tree.

He left him there for another 3 days. On the 8th of March, he returned to see if he had died before burying him in a shallow grave.

Check out his confession to police:

The father of two reportedly led police to the shallow grave where the decomposed corpse of late Pa Odoh was recovered yesterday Tuesday the 4th of April, 2017.

Enugu state Police spokesman said Ekemezie who regretted his actions blamed the devil for using him to take the life of his uncle.