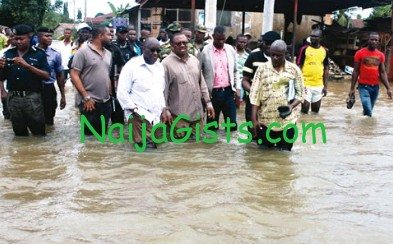 An unidentified man was yesterday said to have chopped off the hand of his son in floods in Anambra State. naijagists.com

He reportedly mistook the hand for a snake inside the floods.

A former Chief Judge, Justice Paul Obidigwe, narrated the incident in Awka, the state capital, at the inauguration of a special squad of the state branch of the Nigerian Red Cross Society.

Though he did not give details, the former CJ also gave instances of other incidents that portrayed the harrowing experiences of flood victims.

During the inauguration, members of affected communities narrated their ordeal.

The former CJ called for urgent assistance to the victims at various camps, adding that there had been stories of casualties from many communities.

According to him, there was a man from one of the villages that had been sacked by the floods, who mistakenly killed his son in the night after chopping off his hand in flood waters.

He said the father noticed a small figure emerging from the waters and reached for his cutlass, thinking it was a snake.

The man, Obidigwe said, chopped off the boy’s hand.

It was when the people found the boy’s body floating on water the following day they realised that the man did not kill a snake but his son.

The former CJ said as the floods swept into the villages, carrying animals and reptiles from the wild.

He said in one instance the floods swept away a young boy without the father’s knowledge.

Obidigwe also narrated a story of a man that had committed suicide having lost all his cash crops that he took a loan to cultivate.

He said there was yet another of a man who drowned while he attempted to ferry firewood from his submerged home in Ayamelum.

Obidigwe said: “It was discovered that the internally Displaced Persons (IDPS), who were earlier accommodated in schools and churches have been further displaced because flood has submerged the earlier designated camps.

“The situation of the surging flood has aggravated the condition of flood victims because nearby camps are no longer available.” (Source:The Nation)