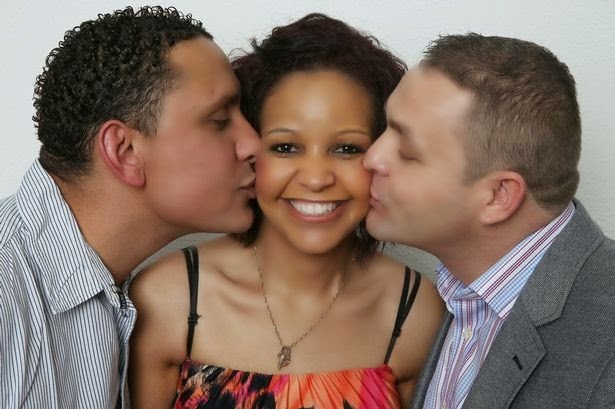 The happy madam pictured above is Maria Butzki, a married mother of two who is doing the unthinkable.

33-year-old Maria now lives with her husband, Paul Butzki and her boyfriend, Paul  Gruman under the same roof.

Maria claims when she got married, she didn’t realise how much she’d missed him until they start living together. Also she couldn’t imagine living without her husband.

So she made a deal with both men by coming up with what she called a “perfect solution”.

In a recent interview, Maria, a real estate agent said:

“People might think it’s weird but I love both men and couldn’t choose between them,”

“Peter is a great guy. When Maria first had the affair with him I was just heartbroken. But as I got to know him, I realised we have so much in common. We both adore fishing, and he’s like a surrogate dad to the kids.”

Hear what her boyfriend, Peter Gruman, a construction site manager said about the relationship:

“We all get on so well. It doesn’t feel as if I’m ­sharing Maria. There’s no ­jealousy …it feels as if we area team.”

On how they make love, hear Maria talk:

“The three of us never share a bed. Although I have a sexual relationship with each man, that side is kept very private. If Paul is out, then Peter and I might make love, and vice-versa. But both men turn a blind eye and we never discuss it with one another.”

The trio started living together in 2012 after 3 years of Maria’s secret relationship with her boyfriend.

Peter, the boyfriend sleeps in the living room while Paul, the husband and Maria sleep in the bedroom upstairs with one of their daughters.

Lord have mercy which kind relationship is this…..

How can a normal man share his wife with another man.

The end is near o.