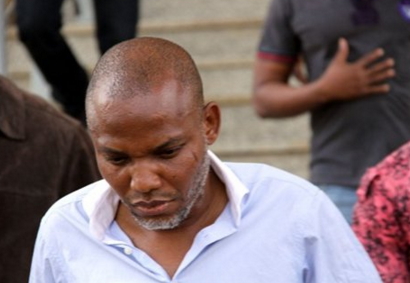 The DSS has given details of how its men apprehended the leader of the Indigenous People of Biafra (IPOB) and Director of Radio Biafra, Nnamdi Kanu.
The DSS said but for the tenacity of its men, Kanu, who lodged in a Lagos hotel under a fictitious name, would have escaped arrest.

It explained how arms and ammunition were recovered at the Ubulusiuzor, Ihiala Local Government Area of Anambra State home of one of Kanu’s associates, Benjamin Madubugwu.
The information was contained in some documents filed with a fresh six-count charge against Kanu, Madubugwu and David Nwawuisi.

A DSS operative, Temisan John, who led the team that arrested Kanu on October 14, said Kanu was apprehended in the company of a woman at the Golden Tulip Essential Lagos Airport Hotel located at 42/44, Murtala Mohammed International Aiprot Road, Ikeja, Lagos.

“On arrival at the hotel, the staff denied having Kanu there or having any knowledge of him, even when showed his photograph. The guest manifest, for about five days, was also printed and the name was not found on any.

“However, relying on accurate intelligence, the team decided to conduct a physical search on all the rooms and Kanu was arrested in Room 303 while hibernating with a young girl, Maryam Ibezimakor, with all his broadcasting and communication gadgets set for use.

“It was then discovered that Kanu checked in under the name Nwanekaenyi Ezebuiro. He was subsequently arrested and taken to the command headquarters.”

Kanu, Madubugwu and Nwawuisi (identified as a Field Maintenance Engineer with MTN Nigeria), were to be arraigned on December 23, but Kanu stalled the proceedings when he told the trial judge, Justice Ahmed Mohammed, that he doubted his ability to give a fair trial.

This prompted Justice Mohammed to withdraw from the case and direct that the case file be returned to the court’s Chief Judge for reassignment to another judge.