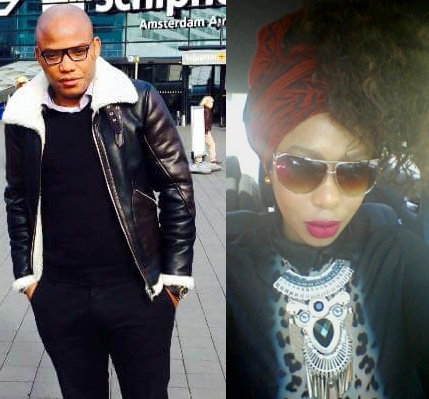 US-based Chioma Amaryllis, a former PR coordinator for Radio Biafra alleged that Kanu is misleading gullible Igbos and collecting money from them to sustain his lavish lifestyle.

“I am Chioma Amaryllis I live in the USA but I am from Mbaise in Imo State, a proud Igbo woman. I had a relationship with Nnamdi Kanu as he presented himself to me in the US as a single man. I hope that the point I am trying to make about Nnamdi Kanu will take precedence. I am telling the truth about Nnamdi Kanu & Radio Biafra as I saw it and closely witnessed”

“It is easy enough to live in Malasia, China, Japan, Indonesia and donate money to Radio Biafra”
“I bought and paid my ticket from the USA to Nigeria for Radio Biafra to see things for myself”
“I was donating my savings in the USA to Radio Biafra for defence & all forms of funds”

“As Nnamdi Kanu’s girlfriend I went to Nigeria myself I wanted to see what Biafra was about”
“It is not enough for Ndi Igbo’s to get excited by someone you hear on the radio, verify”

“I don’t want Igbo’s in diaspora to believe me, buy your ticket like I did and see Nnamdi’s lies. Go back home to Igbo Land and do your investigations, don’t be deceived”

“Money was being collected by Nnamdi Kanu, huge money from genuine people & misappropriated,” she said.

Nnamdi Kanu collected huge donations to build a cenotaph for Ojukwu but never did. A lot of donations to Biafra went down the drain & I have a right to speak out because I contributed.”

“When Nnamdi Kanu asked for $8 million to start in 2014, I took a step back knowing Ojukwu used his own money for Biafra. I am unhappy people are being tricked to donate money using Biafra as a cover.”