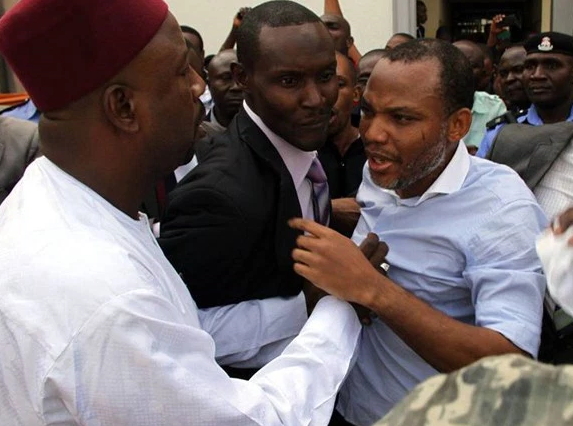 Why is the DSS still holding your client despite being granted bail by the court ?

That is one of the sundry challenges we are facing – I cannot understand any more. My common understanding of the rule of law is that the law is supreme and above every individual and institution. I also know that in a democracy all the three organs of government are independent. In Nigeria, we run an impartial and independent judiciary. And I must reiterate, at this point, that I am impressed at the level of judicial activism exhibited by these two courts we have approached in this case. They restored the hope of both the Bar and the common man. So, the practice is that once an order is made by a court of competent jurisdiction, it is bound to be obeyed. In this case, we are still watching how it will go. We have exercised the fundamental rights of Mazi Kanu as provided for under our law and the court has upheld our point of argument. The court has made an order to which the prosecution has been served the content to which is to the effect that they should release Mazi Nnamdi Kanu unconditionally. This order was served on them on the 17thOctober, 2015.

We understand the Federal Government has preferred a new charge of treason against your client, how do you look at that?

Yes, I was surprisingly served with a charge when I went to the DSS on the 17th October, 2015 with the bailiff to effect the order of the court for my client’s release. It was a big surprise to me. Imagine a situation where I was armed with high hopes to secure the release of my client only to be served with a charge for Treasonable Felony instead of his release. However, we are already studying the charge. But I must say this, despite the charge of treason that is preferred against Mazi Kanu, I wish to reiterate that there is a subsisting court order which ordered for his unconditional release; that order must be obeyed. It is interesting to point out that within the span of three months, we have had situations where Mazi Nnamdi Kanu has been alleged to have committed three different offences: Conspiracy and leading an unlawful society; Terrorism and Terrorism Financing; and Treasonable Felony. This presupposition of this act is that the authority is shopping for the offence to levy against him unsure which he has committed against the state. I have said, times without numbers, that we are ready to stand trial at any time they are ready. However, our contention is that the prejudicial manner of continuous detention of our client puts the authorities in the light of persecutors instead of the revered position of a prosecutor.

Do you think there is hope for your client to regain his freedom soon?

Of course, yes. Do not forget that my client has been granted his freedom since October 19, 2015, which was upheld by the Federal High Court on the 16thDecember, 2015. It is regrettable that the authorities are still holding him at their whims contrary to the order of the Federal High Court made on 16th October, 2015. This, to me, is not healthy for our democracy as it creates a siege mentality in our polity. But I am optimistic that no matter how long the night may take, the day will surely break.

President Buhari, had in the past supported self-determination, how do you look at that in the face of the trial of your client?

My optimism in the freedom of my client is informed by the fact that both the Federal Government and my client, Mazi Nnamdi Kanu, are contending on the same issue but from different perspectives. As earlier mentioned, we have just been served with a charge of Treasonable Felony against him. My client on one hand argues that he is merely championing the exercise of the people’s right to self-determination. While the Federal Government is of the view that such rights which is to dismember Nigeria is criminal. So, you see that it is a matter of nomenclature as well as which point you are sitting. This right to self-determination is a right protected both in the UN Charter and the African Charter on Human and Peoples Rights. President Mohammed Buhari, I am sure, believes in the right to self-determination of peoples. I think the point of divergence between them is on certain actions, the modus operandi, that my client has taken in pursuit of this right. It is on the basis of this that it is pertinent to state that President Mohammed believes in the concept of self-determination. He has expressed this during the 70th United Nations General Assembly held on 15th September, 2015 where he made an overt case for the self-determination of the People of Palestine and the Western Sahara respectively.

Many Igbo leaders are interested in wading into the matter and possibly brokering peace in this standoff, is your client opposed to this?

My client is not averse to peace. Remember that his strategy is that of non-violence. Non-violence is synonymous to peace. Personally, I have also preached peaceful settlement of this issue to well-meaning Nigerians. As a result, if Igbo leaders are interested in taking part in the peace process, I want to assure you that my client will support it, but it has to be an intervention that must be bona fide and predicated on utmost trust and sincerity on their part. This preliminary peace process will be to lay a foundation for the bigger/comprehensive dialogue upon the release of my client. To me, no meaningful and enduring dialogue takes place while he is still incarcerated because you cannot negotiate with a man in chains. He must be released first. Prominent Igbo leaders as Chief Chekwas Okorie, Chief Orji Uzor Kalu, Archbishop Emmanuel Chukwuma, Senator Ike Ekweremadu and others too numerous to mention, for want of space, have joined the clarion call for the release of my client.

Other prominent Nigerians such as Bishop Mathew Hassan Kukah, Prof. Wale Soyinka, Alhaji Balarabe Musa have also advised that the Federal Government should toe the path of dialogue to avoid the matter getting out of hand. As for me, I will enjoin the government to play according to the rule of law and at best adopt alternative dispute strategy in the interest of Nigerians.

The offence of high treason carried the death penalty until 1998 and today has a maximum sentence of life imprisonment.

Please remember Kanu in your prayers.