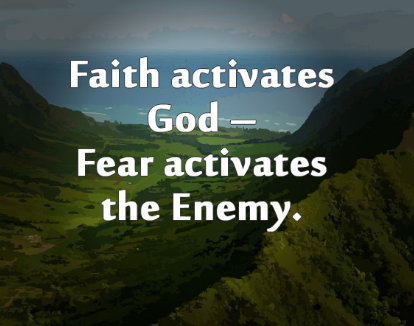 May 17, 2017 – Midweek Inspiration: Why You Should Never Allow Fear To Control You

One day, faith was farming on his land, and then saw death ready to go out. He asked him where he was going to, and he replied that he was going to carry out his normal duty. Faith now asked him how many people he would kill that day, death said 7.

Later in the day, death returned with over 100 people. Faith then challenged him and ask why 100 people when he said 7 only. Death now said to him, “I can’t lie to you; I killed only 7 people, the rest were killed by fear…”

Fear is the greatest killer we have in this world. Whatever situation you find yourself, whatever bad news you have received, first calm down, be calm, it’s not the final report, God has the final say.

One of the past governors of Nigeria, only died out of fear, because a toy gun was pointed to his head. Some people will tell you that fear is false evidence against reality, so fear not, God is still in control.

How To Fulfill Your Destiny By Discovering Your P.A.T.H
Sunday Inspiration With Bishop David Oyedepo: Accessing God’s Plan From The Book
Advertisement