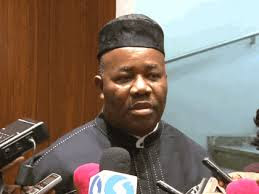 A citizen’s petition, not an investigation by the EFCC was the reason the agency invited Senate minority leader and former governor of Akwa Ibom State, Godswill Akpabio to its office Friday.
The citizen, Leo Ekpenyong, an Abuja based lawyer accused Akpabio of stealing N108.1billion of Akwa Ibom funds.

In the petition dated June 22, 2015, Mr. Ekpenyong had stated that between January and December 2014, the ex-governor colluded with two of his personal aides to steal a huge sum of N108.1 billion from the state’s treasury.

According to him, “Between January –December 2014, it is on record that the trio of Godswill Akpabio, Mr. Etekamba Umoren and Mr. Udo Isobara, made illegal but substantial withdrawals of cash from a designated state government-owned account with Zenith Bank with account number: 1010375881 amounting to N22.1 billion”.

“It is worthy of note that reasons for such ungodly cash withdrawals against financial regulations and due process laws range between sundry use and unjustifiable expenditures by Akpabio and his numerous surrogates and proxies.

“For example, a whopping N18 billion was withdrawn fraudulently from the state FAAC account with the United Bank for Africa in tranches of N10 million and above by Mr. Isobara in a surreptitious manner to conceal their dishonest intention.”

In the period under review, the petitioner added that the ex-governor also withdrew a huge sum of N18 billion from the state account under the guise of special services, reception of very important guests and sundry items.

Others include a multi-billion naira property at Plot 23 Olusegun Aina Street, Parkview, Lagos; a multi-billion naira 25 storey building and others in Lagos.Former Governor of Akwa Ibom State and incumbent Senate Minority Leader, Godswill Akpabio, was on Friday quizzed by the Economic and Financial Crimes Commission (EFCC) over allegations of financial impropriety levelled against him.

EFCC operatives stormed Akpabio’s Abuja residence Friday evening to invite him to their office. Akpabio, accompanied by a few aides and a Senior Advocate of Nigeria, SAN, Ricky Tarfa followed the EFCC men and arrived at the office at about 5:20pm.