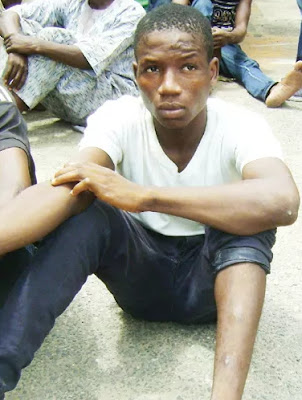 A restaurant owner at Iyana-Iba area of Lagos has disowned her 16-year-old son, Ibeh, over robbery allegation. Police detectives in Lagos arrested Ibeh for being in possession of a toy gun. The teenager, however, insisted that he was not a robber.

The police accused Ibeh of using the toy gun to rob unsuspecting passengers in traffic at night at Iyana- Iba.

When his mum heard that her son had been arrested over allegation of robbery, she promptly disowned him.

According to Ibeh, his mum didn’t try to beg the police to leave him. Ibeh, who dropped out of school in primary three, used to wash buses and motorcycles at a carwash.

But my mum and I had been having a strained relationship. She allowed the police to take me away.

She said I used to give her too much problems. She even said that whenever she asked me to wash used plates in her restaurant, I would run away. People told me that she had disowned me.”