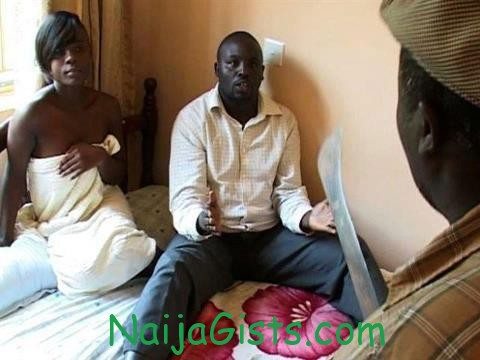 A Lagos-based businessman, Tope Oluwatuyi Fasanmi, has dragged his wife, Zainab Fasanmi before the Agege Grade ‘A’ Customary Court, Lagos, Southwest Nigeria, describing her as a prostitute who slept with his company driver. naijagists.com

The divorce-seeking businessman accused his 32-year old wife of engaging in constant fight with him, lack of respect for his family, asking the court to dissolve the marriage over irreconcilable differences.

He further told the court that his wife keeps late nights and doesn’t bother about the welfare of their only child on such occasions.

“My wife likes keeping late rights. She does not bother about my welfare nor that of our only child. In fact, to make love to her is a problem. She’s a prostitute and I don’t want her in my life anymore.

“Whatever we discuss at home, she will go and discuss with her mother. I bought a car for her to be conveying my son to and from school but she prefers to drive the car to beer parlours to frolic with her manfriend.

“There was a time a man sent a text to her phone that he really enjoyed her, asking when they will meet again. When I asked her about the text message, she turned it to something else and an argument ensued and I slapped her. She used that as an excuse to go back to her parents’ house.

“When I dialed the number that text her, it turned out to be that of my company driver whom I usually send home to bring things to my house not knowing that they were sleeping with each other,” he told the court.

Speaking further, he told the court that all his efforts to satisfy her turns out to be his undoing, adding that the blackberry phone he bought for her aided her promiscuity.

The wife, while defending all the allegations levelled against her, said that since they got married in 2007, her husband has been taking very good care of her.

She added that what caused disaffection in the marriage was after she came back from her parents’ house (after he slapped her) and met used condoms, earrings and under wears in their room.

“After all these discoveries, I did not ask him anything about them and he behaved like a real gentleman for a while. All he said about me was not true. I don’t go to beer parlours or smoke, but I’m fashion conscious.

“It’s true that he bought a car for me but it was a joint effort. He’s promiscuous. He has three girlfriends at Winners’ Chapel where he worships on Sundays. There was a time he left me in church and didn’t come back to pick me home. When I called him, his phone was switched off.

“When I confronted him at home, he lied that he was called from office. When even I tried to correct him, he will shout at me and turn it to something else,” she said.

She pleaded with the court to save her marriage, adding that she still loves her husband very much.

The court president, after listening to both parties, urged them to go home and reconcile while the matter was adjourned for further hearing. (thenews)