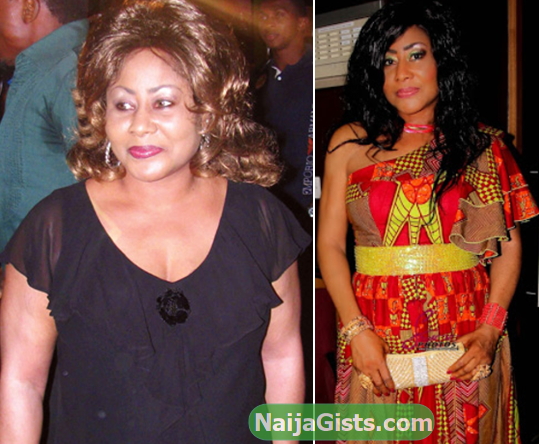 Veteran Nollywood actress Ngozi Ezeonu was the center of attraction at the recently concluded premiere of Briefcase movie in London, UK.

The actress who used to be of an average size was spotted with a beautifully slim figure.

Ngozi Ezeonu’s new slim look excites fans with many of them questioning the actress on how she came about her new figure within a short period of time.

Some even claim Ngozi Ezeonu might have contracted sexually transmitted disease (HIV).

The actress who’s aware of the all story making round has spoken up.

In a phone chat with Stella Dimorkus, hear what Ngozi Ezeonu said:

”Stella  I am not sick.i have been battling with my weight for ten years and i have finally achieved what i want.i am not sick,it is my choice to loose some weight and i pulled it off.i feel good.loosing weight takes a lot of discipline”

”I cut off eating a lot of things,i was addicted to coca cola,juice and  i cut off all that,i also stopped eating banana altogether,it took a lot of discipline.i stopped eating too much carbohydrates and i eat more of proteins and a lot of veggies…a lot”.

The actress who claims she has never been married may now give marriage a try.