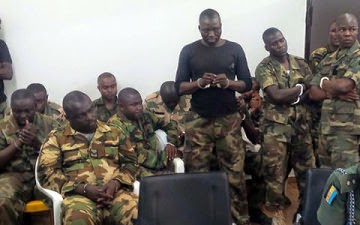 Dec 14, 2014 – Nigeria Accused US Of Training Soldiers Sentenced To Death For Mutiny To Disobey Military Rules

According to Sunday Punch, Nigerian military alleged that the recent mutiny committed by some soldiers on the war front was as a result of the ‘negative training’ they received from US trainers.

A security source alleged that it was a major reason the Federal Government of Nigeria stopped the US from training Nigerian soldiers on counter-terrorism.

Sean J. McIntosh said, “The allegations are baseless. The third phase of training did not occur because the Nigerian Army failed to provide the necessary equipment for the training.”

A security source disclosed to Sunday PUNCH that despite the presence of the US experts, there was no noticeable impact on the task of recovering the abducted girls of the Government Girls Secondary School, Chibok.

He added that the US forces had not given the expected intelligence that could have been utilised by the nation’s security forces against Boko Haram.

“Our investigations show that some of the soldiers that were involved in mutiny received training in the US. These trainings often highlight negative things about the Federal Government.

“Another thing Nigerians should note is that since the Americans came here purportedly to help get the Chibok girls, they have not done anything. What have they done with all their technology and might? Is it not suspicious?”

May7ven Heartbroken: My British Boyfriend Dumped Me Bcos I Relocated To Nigeria
Photo Of Ghanaian, African Man Carrying Baby On His Back Using Wrapper At London Airport Goes Viral