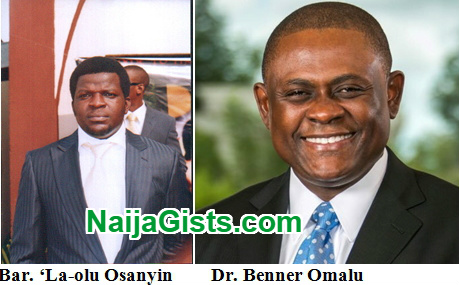 The best of Nigerian Medicolegal minds were on display at the recently concluded 22nd World Congress on Medical which took place at the Los Angeles California from the 7th till the 11th of August 2016.

The World Congress on Medical Law is the annual convergence of global leaders in the Medical Law field and the congress is organized annually by the World Association for Medical Law (WAML) which was established in Ghent, Belgium in 1967.The purpose of the WAML is to encourage the study and discussion of health law, legal medicine and ethics, for the benefit of society and the advancement of human rights. The aim of the WAML is to promote the study of the consequences in jurisprudence, legislation and ethics of developments in medicine, health care and related sciences.

Other Nigerian attendees include Dr. Abdulmumini Ibrahim, the Registrar at Medical and Dental Council of Nigeria and Mrs. Wuraola Aina of the Nigerian Medical Law Summit Group.

Mrs. Folashade Adegbite’s paper was titled; “Emerging Trends Necessitating Controlled Legalized Abortion in Nigeria: The Trauma of Rape Victims of Boko Haram”. The paper x-rayed the double jeopardy effects of rape victims impregnated by their rapists, she conducted a medicolegal analysis of the situation and juxtaposing this situation with the current stringent existing legislations on abortion in Nigeria, she recommended the enforcement of the autonomous right of such victims to elective abortions.

The second Nigerian paper was delivered by a Lagos based Medical Lawyer who is very well renowned within the Nigerian health system for his medicolegal training sessions.

Bar. Laolu Osanyin who incidentally is the first and currently the only African Member on the Board of Governors of the World Association for Medical Law (WAML), is a member of the American College of Legal Medicine and had served on the Global panel of health law experts, Osanyin who is the Director General of the Nigerian Medical Law Summit Group presented two papers, his lead paper was titled; “Consent Procedures for access to Organs and Tissue Donations in Nigeria”.

His paper reviewed all existing Nigerian medicolegal legislations and protocols for the procedures for access to Organs and Tissue Donations in Nigeria in an attempt to determine if the alarm raised against this new law is justified and or to identify if the commendations made by proponents of the National Health Act are misplaced.

The third and final Nigerian presentation at the world congress was by an individual who had attained a celebrity status in the American Health system, entertainment and sports.

Dr. Bennet Omalu is a Nigerian physician, forensic pathologist and neuropathologist who was the first to discover and publish findings of chronic traumatic encephalopathy (CTE) in American football players while working at the Coroner’s Office in Pittsburgh. His travails in the hands of American football (NFL) Administrators, fans, fanatics and enthusiasts was adapted into a Hollywood movie titled Concoction, where Hollywood superstar Will Smith acted the role of Bennet Omalu.

In Dr. Omalu’s paper titled; “A Forensic Pathologist, Chronic Traumatic Encephalopathy [CTE] and Conformational Intelligence [CI]”. Omalu describes Conformational intelligence [CI] as a phenomenon whereby your intelligence, your intuition, your intellect, your imagination, your mentality and cast of the mind is controlled, constrained and constricted by the expectations, traditions, cultures, norms and mores of society without you knowing it or being aware of it.

According to Omalu “We are always one of many, we always belong to a group, and we always belong to a society. It is a phenomenon whereby the many control the one. This is supported by the central limit theorem, whereby human behavior and indices cluster and converge towards an expectation, the mean or the middle. 95% of us will always be within plus or minus two standard deviation of the expected, with 5% of us within the margins, which produces a homogenization of thought. Unfortunately, society looks down upon those at the margins”.

He further stated that “the discovery of CTE in an American football player by a foreigner like myself who was totally oblivious of American football epitomizes Conformational intelligence (CI), yet, upon my discovery, because I was not expected to do so by society, my discovery was denied, ridiculed and even further marginalized”. In concluding his exposition, Dr, Omalu recommended the need recognize and address the constraints of Conformational intelligence CI in 21st century business, public policy, legislative and scientific endeavors.

It was a proud congress for Nigeria as participants from all over the world had the rare privilege of engaging with Nigerian professionals and thereby being able to cross fertilize ideas and also share experiences from other jurisdiction.