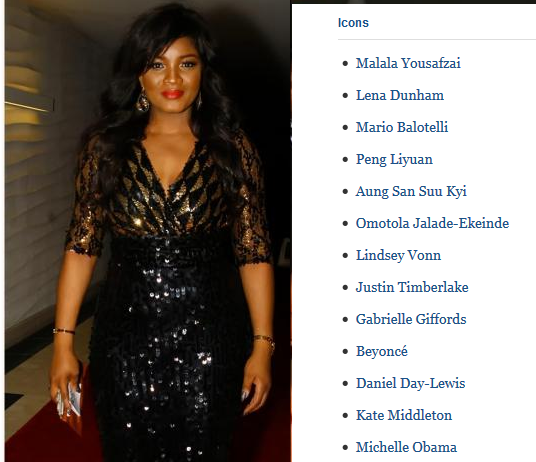 From Nollywood to Hollywood and now Time Magazine. Nigerian actress Omotola Jalade Ekeinde is gradually approaching the peak of her acting career.

The beautiful mother of four has been picked among Time magazine‘s 100 most influential people in the world.

In a recent PR by Time magazine, Omotola Jalade was described as Africa’s leading showbiz icon.

After nearly two decades of consistent on-screen success, the African Jewel’s accomplishments have been recognized as a pioneering force of the Nollywood film industry.

Nollywood actress Omotola Jalade Ekeinde has received dozens of awards, however, being noted on the TIME 100 not only catapults her superstardom but also reinforces the African film industry as a global powerhouse.

Popularly called Omosexy by her fans, Omotola’s influence has transcended the African continent thanks to her stellar award-winning performances, respected humanitarian efforts, and being coined “The African Magic” by international media outlets alike,” the statement reads.

Read what TIME wrote about her below

The  world’s most productive English-language film industry is not Hollywood  but Nollywood. The teeming Nigerian cinema grinds out some 2,500 movies  a year, mostly direct-to-DVD quickies mixing melodrama, music and an  evangelical Christian spin. (Think Bollywood via Tyler Perry.) Employing  a million Nigerians, Nollywood enthralls millions more who come for the  thrills, the uplift and the artful agitations of Omotola Jalade-Ekeinde  — the Queen of Nollywood.

Called OmoSexy by her fans, she has made 300 or so features, from the  1996 Mortal Inheritance to the 2010 superproduction Ijé, shot partly on  location in Los Angeles. Married to an airline pilot she wed on a  flight from Lagos to Benin, Jalade-Ekeinde brings a juggler’s grace to  her roles as actress, singer, reality-show star, mother of four and  philanthropist (the Omotola Youth Empowerment Programme).
Success hasn’t spoiled Africa’s most renowned leading lady. Rather than going Hollywood, Omotola wants to stay Nollywood.

She is married to a Nigerian pilot, captain Matthew Ekeinde…