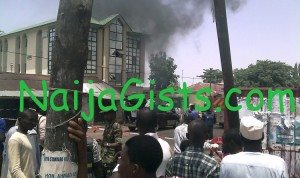 On Tuesday the 1st of January, 2013 (New Year’s day), the Nigerian army officials said they killed 13 Boko Haram militants during a gun-battle in Maiduguri. naijagists.com

According to Nigerian army spokesman, Saqir Musa, at around 4pm on Tuesday, JTF operation restore order had an encounter with Boko Haram terrorists at Bulabulin and Bayan Quarters of Maiduguri.

A soldier died in the battle while two others were severely wounded.

The spokesman said 13 Boko Haram terrorists died in the fight with no civilian causalities.

“Civilians were well protected and have no casualties recorded as a result of the encounter. The operation is ongoing to apprehend the fleeing members of the gang and recover more weapons,” Musa said.